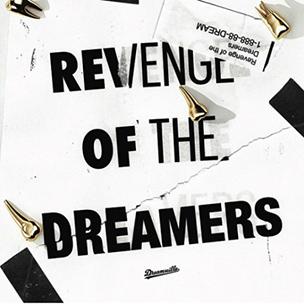 In the Middle Ages, then-king of England William the Conqueror would gift his most ardent military supporters with fiefdoms to rule in appreciation of their prowess in battle. In a similar event, on January 29, 2014, Jay Z gave J.Cole of the Roc Nation Army a gift and a blessing. Foremost, the gift involved Jay “chaining” Cole with the former’s original Roc-a-Fella chain, thus blessing J. Cole with good tidings as his “fiefdom”–new Interscope Records subsidiary Dreamville–launched with the Revenge of the Dreamers mixtape. In being both a) emblematic of J. Cole maturing into a leading mainstream Rap superstar and b) featuring material wholly fitting into sounds typical of Clear Channel radio fare, it’s a mixed bag filled equally with promise.

Aside from having to hear the seven-month-old J. Cole and TLC duet “Crooked Smile” as the mixtape’s outro, Cole and his Dreamville cronies showcase easy manners and listenable deliveries on this compilation. Bas, Omen, Treasure Davis and K Quick are the first artists that have been introduced as being affiliated with Dreamville, and all deliver performances that don’t so much create fans for life, but exemplify excellence on the side of mainstream-friendly label Rap. As a collective, to compare Dreamville to Odd Future or Top Dawg Entertainment on either a content-based or creative level is an exercise in futility. This isn’t Rap steeped in the past or idealizing the future, this sounds like right now. Intriguingly enough, there’s likely a more sustainable market for that than anything else in pop music at the moment.

The Dreamville quartet all complete a picture of a solid vision, but none yet have that superstar quality of being greater than the sum of their parts. Omen shares a similar introspective storytelling style to Cole, but dissimilar to the North Carolina native delivers raps with bravado and verve. “Henny Flow” and “Motion Pictures” are his standout performances here, as his willingness to engage the listener with his personality shines through. Omen shows adeptness at handling a soulful track that will likely prove to be advantageous for any potential crossover aspirations. Bas and Treasure Davis are the “spitters” here, with hooks and choruses falling secondary to bar-for-bar lyrical slaughters. “Golden Goals” is an exhausting two minutes and 48 seconds, (the real takeaway quote being “100 ni**as yellin’ ‘New York back / I hear ‘em rappin’, they only setting New York back” being the most damning quote about fresh and relevant content in the “New York is dead” conversation) comparable to that moment when a caged lion is set free into the jungle. As well, Davis’ “May the Bitter Man Win” is a strange choice as the bitter and lovelorn tale presents limited reach for a mainstream debut. Similar to K Quick, Davis requires further development of an engaging presence and the ability to polish his tracks from rugged stones into uniquely attractive jewels.

J. Cole’s arrival as a mainstream hit-maker is certainly expected, and making key developments in execution. Certainly, the influence of mentor Jay Z is obvious in the diversity of voices from “above the fray” dismissal on “Lil’ Ni**az” (which features five mentions of his ability to earn money in batches of $250,000 in just under 90 seconds) to flawless and endearing pop-soul dominance on title track “Revenge of the Dreamers,” the reflective vibe of “Blowin’ Smoke” and the overconfident lothario on posse anthem “Bitchez.” Cole’s evolution to boss status though is a tale best told by a unique skill that he has added to his arsenal. He raps to the mood of the track with which he has been presented, and is gifted with the ability to bend the metaphorical tree of highbrow production and allow the masses to enjoy the fruit it bears. Notable on this mixtape is Cole’s move to almost become an anti-Drake in the sense where Drake explores his craft and is willing to take the extra risk, but Cole is growing in competence at laying in wait and approaching his craft with a patient eye and ear.

In 2013, Cole seemingly provided the anecdotal and statistical proof he could stand next to Rap’s heavyweights. He notched a top five placement with Born Sinner and, along with Miguel, was nominated for “Best Rap/Sung Collaboration” at the 56th Annual Grammy Awards. Musically, there’s nothing on Revenge of the Dreamers to change the minds of Cole detractors. But, now backed by four talented emcees on his Dreamville label, Cole may finally have the beginnings of the necessary firepower required to back up his audacious claim to the upper echelons of stardom in Rap music. If it’s once non-believers that were causing Cole angst, this body of work clearly illustrates that he’s certainly taken great steps to take “revenge.”