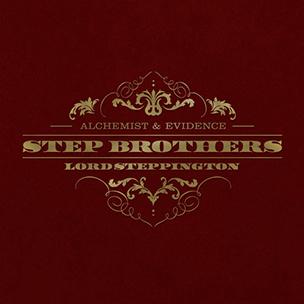 In the 2008 comedy Step Brothers, lead characters Brennan Huff and Dale Doback can alternately be found wearing tuxedos to a job interview, tea-bagging a drum set and filming a Rap video entitled “Boats ‘N Hoes.” There are no Academy Award aspirations, but the film serves as a cult classic of sorts by providing a vehicle for the slapstick, improvisational comedy of actors Will Ferrell and John C. Reilly. It’s random and crude at times, but fully appreciated by its intended audience. Recording together as Step Brothers, childhood friends Alchemist and Evidence more or less operate in the same fashion with their collaborative effort, Lord Steppington.

“If we ain’t on the same page by now, it’s never happenin’ / Decoding all these messages is only for the passengers / Coded for the massacre, when it occurs / I ain’t condoning it, best believe I’m owning them furs…” Ev rhymes on “Dr. Kimble.” By then, he and Al have already referenced Dire Straits’ “Money For Nothing,” the ‘60s crime drama The Fugitive and hall of fame New York Mets catcher Gary Carter. If you’re the type who enjoys falling down the rabbit hole of a good Google search, then connecting the dots between all the randomness adds another level to the listening experience. If you somehow know that both Alchemist and Evidence shared the same childhood doctor (Dr. George Kimble), it may elicit a chuckle. If none of the above is true, Lord Steppington is still provides thoroughly enjoyable material.

Featured guests such as Whooliganz member Scott Caan, Odd Future’s Domo Genesis and Dilated Peoples’ Rakaa Iriscience balance things out for those who prefer things a bit more straight-laced. But the duration of Lord Steppington finds both Alchemist and Evidence spitting non-sequiturs such as, “Human bones from a bum hold up the table / Money talks like spaghetti sauce with the basil” (“Legendary Mesh”). It all makes about as much sense as Guru referencing Bruce Willis and the popularity of lemonade in the same verse on Gang Starr’s “DWYCK,” but it works incredibly well.

Over the last five or so years—most notably on 2012’s Russian Roulette—Alchemist has shown a penchant for applying the techniques of collage making to his music. He uses this method in both his production and rhyme form, while Evidence’s understated, deliberate cadence bends to the overall haphazard nature of the album. So while you don’t get Ev in full on Cats & Dogs mode, he’s not above breaking out into a rendition of The Jackson 5’s “I Wanna Be Where You Are,” then circling back to chastise the shallow nature of Los Angeles. Alchemist follows suit by transitioning to a completely different beat two minutes into the song. The end result, “Swimteam Rastas,” is just as incoherent as the entire project. And just to add to the fun, Al makes a reference to Prestige Worldwide’s greatest hit.

Despite its buttoned-up title, you won’t find any heavy-handed commentary on Lord Steppington. The cut and pasted nature lends itself to members of the current ADD generation and fans of Alchemist’s more recent work, but the project still adheres to the principles of superior Hip Hop. Evidence plays the straight man in this double act. He seamlessly shifts between brief musings on the Rap world, his place in it and pretty much nothing at all. And when he’s not threatening to chop your nipple off or singing Cyndi Lauper’s “Iko, Iko,” Alchemist comes through with the requisite mix of stout basslines, instrumental and vocal samples. It all adds up to a quality album that manages not to take itself too seriously without resorting to being dumb.