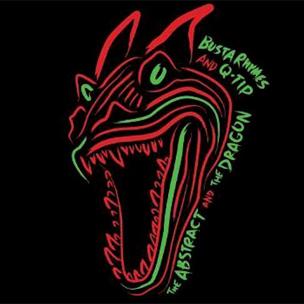 When Busta Rhymes and Q-Tip decide to perform CPR on New York Rap two weeks before December 25th, it’s obvious that Christmas came early. Their recently-released mixtape, “The Abstract And The Dragon” comes at a point wherein New York Rap is in a regenerative place. Two of the hottest New York Rap records in 2013 arguably came from a guy that until recently was accused of co-opting Ghostface Killah’s flow, and another who collaborated with a producer associated with the evolution of dubstep. When talented and hardworking emcees like Action Bronson and A$AP Rocky (and his mob of friends) fail to inspire the creation of “boom bap shit” (as Busta says on the mixtape’s intro), there’s the perception of a major problem. New York is the birthplace of the genre, yet rappers from Atlanta and Compton have recently made very legitimate claims on the city retaining its grip on being the cradle of Rap music and Hip Hop culture. Thus, lyrical aggravator Busta Rhymes and the silky smooth Q-Tip get called into action on “The Abstract And The Dragon,” and in nearly 90 brilliant minutes succeed in placing the crown just out of the reach of a universe attempting to wrest it from the Big Apple’s grasp.

This mixtape presupposes that the last 10 years of Rap music never even occurred. Albums are still selling, corporations still can’t quite figure out how to be down and the top rappers in the game are still hungry. This album is best listened to in a smoked out haze while wearing a Carhartt jacket, Champion hoodie, baggy Guess jeans and either a fresh pair of Jordans or Timberland boots. Though Tommy Lee Jones attempted to tell us six years ago that there’s No Country For Old Men, one of the great benefits of the Internet is that typical rules of life no longer exist, and if they try hard enough, our heroes can become ageless within their timeless legacy.

“The Abstract And The Dragon” is comprised of only four original offerings. While that’s an incredibly small ratio on a project that boasts 22 tracks, both parties bring an incredible amount of focus whether they’re keeping things simple or “abstract.” Major hits like mixtape closers “Scenario” (and its remix), as well as rare b-sides like the still excellent 1991 Big Daddy Kane, Q-Tip and Busta Rhymes collaboration “Come On Down” and ultimate Chris Lighty and Violator Management tribute “Vivrant Thing” are included. As a cohesive whole, the current and classic material mesh well and nothing feels out of place.

If “Butch And Sundance” is supposed to make us think of the duo as gunslingers, then, yeah: Tip’s got the 9 MM with the silencer and Busta’s shotgun unquestionably registers one shot and one kill every time. To continue using murderous metaphors to describe the levels of The Abstract and The Dragon’s excellence, the grizzled lyrical executioners on this mixtape do pull out their swords, but the sound of their blades cutting through the skin and bones of the “weak emcees who fled” (as Tip says on Juice Crew’s “The Symphony” recaller “Renaissance Rap”) and the arguably less than gifted isn’t accompanied by a violent crunch, but rather sounds as effortless as scissors cutting through paper.

“The Abstract And The Dragon” doesn’t turn up as much as it shows and proves. It gets settled in a mood and groove, the only change in bodily reaction to the music being moving from a head nod to a two-step for the entertainingly remixed “Thank You.” If in any way confusing this for anything but an anthem that in being hot at the Tunnel for ‘93 should be the party crusher at cabarets worldwide in ‘13, none other than DJ Kid Capri plays party-rocking MC-as host instead of rhymer on the record. Letting the OG drop for 32 more bars on the chorus, then mixing back in the new school vocal edit of the Alicia Myers classic, all of the stuff that once made Rap music the pinnacle of hip-hop culture is on display.

Busta Rhymes’ first bars that he spits on this mixtape include saying that he feels like a “baby speaking [his] first words” again. As well, on the brief preview of Q-Tip production “Pardon My Ways” from his forthcoming ELE 2 project—upon hearing the thick drums and mellifluous piano sample—Busta immediately invokes the spirit of reggae legend Peter Tosh. If anything, “The Abstract And The Dragon” proves that while you can’t ever re-live the past, it is possible to resurrect the script, tell the entire story over again, and proceed with grace, dignity and excellence. At a time wherein grace, dignity and excellence have been replaced with ratchet, molly and turn up, those values are more important than ever before. Thankfully, in the age of the Internet, age and time are irrelevant. And just as the mixtape’s first track is named, the gods don’t just live through, it’s entirely possible that they can live and reign forever.