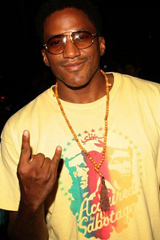 Q-Tip is in need of a renaissance. Never mind the current state of the game or the circumstances which led up to having at least one of his previous solo albums permanently locked in the vaults by the suits at Arista Records. “The Abstract” has been criss-crossing the country on red eye flights to share headlining duties with his brethren from A Tribe Called Quest on the Rock The Bells tour in Chicago. Despite some obvious fatigue, Tip was gracious enough to open up his dressing room and do a little press for his upcoming album, Live At The Renaissance.

In about 10 hours there will be an epic Dr. Jekyll and Mr. Hyde transformation that showcases the Tribe channeling some Native Tongues circa 1993 showmanship. But even at this ridiculously early hour, all it takes is a little conversation about the more abstract parts of his catalogue and performing to make Q-Tip partake in a rebirth akin to the one scholars use to describe Europe’s cultural movement of the fifteenth century. For those who believe Hip Hop is going through its own version of the Dark Ages, it will take more patience to see if Tip‘s efforts will receive a positive reception or be slept on.

HipHopDX: Your last few solo efforts have been deemed experimental, ahead of their time. Did you re-evaluate at all, as far as your approach?

Q-Tip: No, because music is just what I