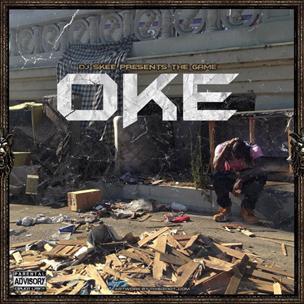 Game has always fancied himself an O.G. And while his early work with JT the Bigga Figga adds some stripes that predate his Dr. Dre and 50 Cent cosigns, some alleged, subliminal shots at Jay Z and overt ones at the likes of Ja Rule created the perception that Jayceon Taylor didn’t respect some of the unwritten rules of Hip Hop. Four albums later, including his multi-platinum debut, The Documentary, even Game’s detractors would likely admit perception has met reality. His nine-plus year run has cemented him a few tiers below his mentor, Dr. Dre as a West Coast vet, but provided him a longer mainstream track record than the likes of Kendrick Lamar, Problem and Dom Kennedy.

Part of that success is lies in Game’s ability to cater to his core fans while adhering to the often-formulaic nature of retail and top 40, terrestrial radio. Much like his previous mixtapes, a good portion of “OKE: Operation Kill Everything” is rooted in Game knowing when to eschew formula. Three cuts in, Too Short, ScHoolboy Q and Skeme join in for nearly 11-minute long “Astronaut Pussy, Welcome To California.” It’s arguably one of Game’s most adventurous tracks—complete with his own distorted vocals, an interpolation of Britney Spears’ “Toxic,” some lyrical and literal gang banging from ScHoolboy and Skeme and Too Short’s trademark, “Bitch” just for good measure.

As expected from someone who spent a significant amount of time under Dr. Dre’s tutelage, Game’s beat selection is excellent. DJ Skee’s touch is also likely a factor here, as the sequencing is also on point, and the drops are noticeable but not invasive. “OKE” offers more soulful, melodic offerings (“Kill Everything,” “Life Is But A Dream, ” “Breakfast With Al Pacino”) than previous Game mixtapes such as “Candy Coronas” and “Brake Lights.” Game is amorphous, switching from his standard cadence to fit in with the current ratchet, turn up scene (“Turn Down For What,” “Fuck A Bitch”) and revisiting his angst-ridden, rapping/crying hybrid flow from “The Doctor’s Advocate.” It’s an effective tool, when used in small doses.

“My son just walked in wanting to see his grandma / But I can’t let him see you like this, damn ma / What the fuck we doin’, what the fuck we doin’ / Somethin’ happen to you, my whole life is ruined / Let The Lord take me from my fuckin’ mama / I’m a kill myself, break in heaven / Then it’s gone be drama,” he howls on “Love On Fire.”

“Maybe In Another Life” is equally powerful, as Game addresses his presumably estranged fiancée and reality show co-star Tiffney Cambridge. Such songs help balance out the trendy club material, and push the overall mixtape into superior territory.

Game’s intention to at least entertain an offer from Cash Money Records upon fulfilling his Interscope obligation is arguably one of Hip Hop’s worst kept secrets. His ear for beats and lyrical dexterity—whether catering to trends or completely avoiding them—will undoubtedly serve him well if he chooses to join the house Birdman built. But, as it concerns “OKE,” Game sounds like someone completely comfortable in his own skin. While the subliminal shots at 50 Cent and Interscope are expected, they’re outweighed by personal accounts inspired by his children, lost love and his city.

It’s telling that Game conceptually approaches his latest mixtape in O.G. fashion—stepping aside as the likes of Problem, Clyde Carson and Joe Moses play their proper position (See Game saying, “Once I retire, this is Kendrick’s crown” on “Life Is But A Dream”) and reasserting his dominance as needed. As usual, his unpredictability outside the booth serves him well once he’s placed in front of a microphone.