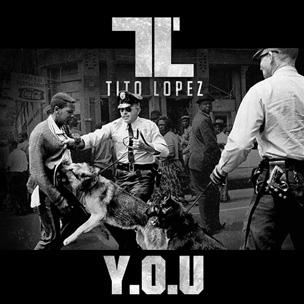 Tito Lopez just wants to make his mom proud. The sentiment is echoed throughout Y.O.U. and explored in various ways. It’s also a sentiment that was first heard on last year’s single, “Mama Proud.” This drive to make mom proud has allowed him to craft a well-thought out mixtape, one that is diverse enough to showcase an array of skills from the self-proclaimed “Black dude with a Spanish name.” It’s also allowed him to hope for more and to dream of becoming “legendary.”

“Let this serve as the proper intro… / Duction to the young’n that function / Like a pro on any tempo…” -Tito Lopez, “Re-Lax”

Y.O.U. begins with a promise of “just Hip Hop” with “no water added” and “no preservatives.” When Mr. Porter’s beat drops, Lopez explains, “Everybody know [he] can rap” before lamenting that it “ain’t enough,” offering a look into his thoughts as an emcee in 2013. Perhaps that’s why Lopez ventures into different areas of the genre here, while always keeping lyrics a priority. From an upbeat bounce (“Bobbejonsun” and “Tryna Get On”) to a mellow sound (“Back and Forth” and “Re-Lax”), Lopez rides varied beats with ease. He blends his lyrics-first approach with versatile instrumentation, mixing flows and cadences along the way. His versatility is displayed as he travels from the the West Coast-inspired opener (“Black Dude, Spanish Name”) to the Memphis celebration “Take a Trip.” It’s clear that Y.O.U. became Lopez’s latest example of versatility. It also exemplifies his appreciation for the past.

“I’m throwback to back / When a rapper wasn’t a clown / If that’s what you want / Then I’m the rapper holdin’ it down…” -Tito Lopez, “Black Dude, Spanish Name.”

Taking a page from the past, Lopez is able to “function like a pro” in ways that are reminiscent of heroes from the ‘90s through the early-2000s. Tracing from Notorious B.I.G.’s handbook for instance, Lopez unleashes a detailed narrative on “Niggas Bleed.” Later, he seems to channel Erick Sermon and Jay-Z, when he asks audiences to “Relax your minds…let your conscience be free.” While adding a bit of himself to each verse, it’s clear Lopez is a student of the culture’s greats. Detractors may hate the trip down memory lane, while supporters will applaud the nostalgic flare. Love it or hate it, Lopez doesn’t hide that he’s a throwback in a Hip Hop DeLorean—albeit one that is confident about his skills.

“I hate to use the word lyrical, but I really am. By definition, the words to a song are called lyrics, so everybody has lyrics. But it’s all wordplay, and I happen to be incredible at it.” -Tito Lopez, 2012 HipHopDX Interview.

From the above comment, it’s clear that T.I.T.O. has no shortage of confidence. Y.O.U. is just another sample of how well he can craft songs, another example of why he deserves the acclaim he’s received to date.

“I can’t be here and gone in six months like some of these dudes.” Lopez states in his official bio. “I’ve got to be where [Eminem] is at…[Jay-Z] is at. I want to be one of these dudes that makes it for 10-plus years. There’s only a handful of them, so I’ve got to be legendary.”

With Y.O.U., Lopez manages to please fans with an album that his mom is likely proud of. That goal has been achieved. Now, time will tell if he can accomplish that other goal, to become legendary.