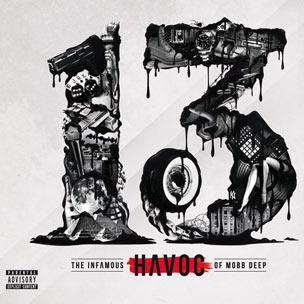 In the past year plus, Havoc has been in the news more for his pseudo-feud and eventual “kind-of” reconciliation with the other half of the Infamous Mobb Deep, Prodigy. Due to this, his solo career and mastery in the production booth have seemed to take a backseat to more dramatic proceedings. But with 13, his first solo work since 2009, Havoc looks to re-establish himself as one of the premier creators of some of Hip Hop’s most powerfully desolate soundscapes. Hav also bills himself as an emcee hungry to display lyrical skills he’s not always given proper credit for, having been criminally billed by many as the less lyrical half of the Mobb.

Not bothering with subliminal intros or skits, Hav instead goes straight for the listeners’ jugular, beginning with “Gone,” a cryptic yet engaging joint reminiscent of classic Queensbridge-style braggadocio. Establishing right away that 13 will be a powerfully dark listen, on “Favorite Rap Stars,” Hav enlists the aid of lyrical juggernauts Styles P and Raekwon, and actually goes bar for bar with both of them over a deep, menacing bass line and a plinking guitar that aligns perfectly with each emcee’s words.

The results are mixed when Hav switches his flow up to a more Southern-influenced cadence and staccato-styled beat on “Eyes Open,” supported by a rapid-fire flow fueled Twista who sounds like he hasn’t lost a step. Havoc offers a rare, brief moment of vulnerability before resorting back to his usual, rhyming, “Know that I just built this / Sweat blood and tears / My brother died, was the only time / Then shed tears / Then switch gears, was outta there like last year / Now everything is smooth like cashmere, chinchilla / Coupe so white, that’s Mac Miller…”

Havoc’s production has always been dark and gritty, bordering on and many times dipping into the bleak. While certain tracks on 13 take a more atmospheric and moody route, he displays a sense of experimentation. Cases in point: the breezy sound effects and humble bongo drums on “Gettin’ Mines,” or the Asian-inspired feel of the aforementioned “Hear Dat.” Unfortunately, that sense of experimentation does not carry over from the boards to the booth, as the album is plagued by repetitive subject matter.

Hav owns a resume that dates back 20 years. But instead of any reflection or even any improvement upon the formula that made Mobb Deep and Havoc’s solo production successful, the same topics are rehashed. Listeners that observed the hiatus can’t help but notice the irony (or outright hypocrisy) when Havoc rhymes the following lines:

“Got these cowards out here plottin’ on me, red dottin’ for me / Blast ‘em with the clapper / Know I keep the ratchet on me / All that beefin’ shit is corny / Nigga faker than a Twitter beef…”

Ultimately, fans looking for a solid but not necessarily classic addition to the Infamous Mobb Deep catalogue, should be satisfied with 13. Appearances from kindred spirits such as Styles P, Raekwon, Royce Da 5’9 and Mysonne help add variety. But Havoc’s talents and willingness to experiment with his tried and true production formula can’t overcome the monotony of the subject matter in his rhymes.