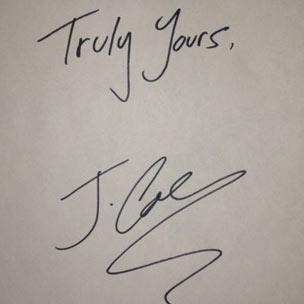 J. Cole has a dilemma of sorts on his hands. He’s quickly developed a loyal following with deeply earnest rhymes and a knack for both first-person and second hand narratives. But more marketable and sometimes forced-sounding offerings such as the platinum single “Work Out” pay the bills and have brought in enough new fans to push Cole World: The Sideline Story past the 500,000 units sold threshold. We’re essentially left to choose between “Album Cole” and “Mixtape Cole.” And while he’s been bristling at the thought of his free EP, Truly Yours being called a mixtape, the five-song, project finds Cole back in the mixtape mode that made The Warm Up and Friday Night Lights so popular.

In his defense, the warm up (no pun intended) to his sophomore set, Born Sinner, is album quality material completely devoid of filler. With no sample clearances to worry about, Cole’s fondness for wearing his influences on his sleeve (or at least mining their discographies) resurfaces. The opener, “Can I Holla At Ya” presents the odd juxtaposition of Lauryn Hill—her “To Zion” is sampled—and Tupac. J. Cole paraphrases the latter’s “Against All Odds” in a verbal dress down of what we presume is an estranged stepfather.

“Who would’ve thought you’d leave my momma high and dry / Last words to a bitch nigga / Why you lie…” The shot is particularly effective for the obvious contrast between Hill and Shakur references, because the man in question helped shape Cole’s influences by introducing him to Tupac’s music and because this is a different side of Cole. The threats to “throw hands” point towards Young Simba sharpening his claws and fangs when the occasion calls for such action.

Truly Yours succeeds for many of the same reasons J. Cole’s previous efforts did. He can weave his own autobiography in with familiar tracks (“Stay”) and, despite his recent success, still relate to listeners in lower tax brackets with wholly new material as on “Crunch Time.” He’s trimmed the fat since Friday Night Lights, and backs up his claim from “Tears For ODB” that he’s “here for more than just to kick some witty metaphors.” Born Sinner will be the ultimate test of Cole’s desire to grow and experiment as he pointed out in the letter that accompanied Truly Yours. This short set indicates he’s taking steps in the right direction, and his next full-length effort will hopefully appease his old and newer fans.

Listen to Truly Yours by J. Cole.