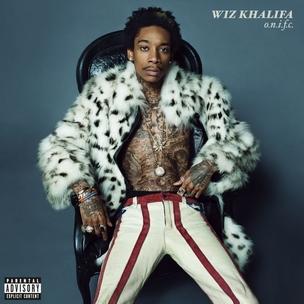 An unexpected leader figure to the younger generation, Wiz Khalifa’s perseverance has paid off with his Taylor Gang brand becoming grand in scale after years of industry setbacks. His ongoing ascent has taken on wings from the mixtape circuit to the business acquisition of reignited Southern icon Juicy J, enabling him to put on for Pittsburgh as both an artist and potential mogul. With a growing number of reasons to stick out his often exposed and underdeveloped chest, O.N.I.F.C. is his hotly anticipated major sophomore release.

Rarely the source of public controversy, Wiz Khalifa has worked his professional career into a simple science of chasing money and smoking marijuana in excess, the primary topics conveyed on O.N.I.F.C. Though he is conceptually limited to flaunting wealth, the strength of his weed and his general propensity towards both, vivid depictions of his lavish lifestyle make up for the lack of lyricism and new ideas. The vanity Wiz and Cam’ron present on “The Bluff” matches the unsurprising 2 Chainz collaboration “It’s Nothin,'” odes to the easy life that fit in well with the lovey dovey “Got Everything” and the Pharrell highlighted “Rise Above,” briefly featuring Wiz’s socialite beau Amber Rose. Bringing things full circle, “The Plan” explains appreciation for how his visions came to fruition with no immediate plans of slowing up.

Taking every opportunity to remind listeners of his accomplishments and dedication to lighting up, the music of O.N.I.F.C. reflects the outlandish nature of its cover art. The album slightly suffers from copycat syndrome with “Initiation” being the latest in Hip Hop’s long line of Lex Luger replications (guest starring Lola Monroe, Taylor Gang’s Nicki Minaj soundalike) and “Remember You” following the trend of working with drug chic singer The Weeknd, but Wiz Khalifa mostly succeeds at occupying his own comfortable lane. Though slightly inconsiderate and brash, his story seeks to inspire where it could all be mistaken for empty stunting.