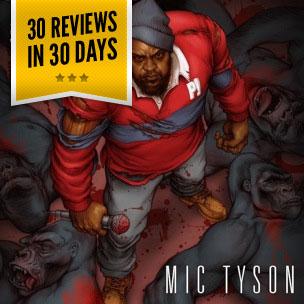 Boot Camp Clik and Heltah Skeltah member Sean Price doesn’t like you. And he’s not worried about it, either—because if you’ve picked up his album, chances are you’re in search of hard-hitting, clever lyricism with a heavy coat of grime. With Mic Tyson, the artist formerly known as Ruck steps back into the ring to deliver a series of haymakers that’ll sate the most bloodthirsty of fans.

“Genesis of the Omega” serves as an intro of sorts before Sean gets into the aptly-titled Bar-Barian, with Jesus Price unapologetically celebrating his true school approach to the game: “I don’t wanna Dougie, I just want money / Studied under the understudy, the one-twenty / Young dummies, can’t spar / No life, my flow tight, like your pants are / … jewelry, what jewelry? / I took this from another rapper, slapped him with the toolie, G.” The rhetoric isn’t new territory, but it resonates nicely with Price’s gruff delivery.

“Pyrex” is lovely in the most ‘90s of ways, with the minimalistic key-and-vocal-sample combination giving Price plenty of room to flex over. Ruste Juxx joins in on “Price & Shining Armor,” which hits home with cinematic samples and unsubtle warnings courtesy of Sean: “Vests protect chests, but never your neck, duke. “STFU, Part 2” is an ode to one of Price’s favorite phrases over eerie industrial production. “Hush” serves as a good example of P spitting entertaining and clever street raps while commenting on other emcees in the game: “I be watchin’ these niggas watchin’ the throne / Watch me take they wristwatch and watch me go home.”

Fellow Duck Down artist and all-universe emcee Pharoahe Monch joins in on “BBQ Sauce,” but his presence ends up being a disappointment. More specifically, his lack of presence is the problem. The majority of the song’s chorus consists of Monch re-rapping a line from “What It Is” off of his 2007 release Desire. It’s never a disappoint hear more rhymes from Price, but Monch could certainly have been used to greater effect on the track. Additionally, some of the album’s production falters at times. For example, “Solomon Grundy” finding itself a little too rooted in apocalyptic, Killah Priest-esque territory, which chips away at Mic Tyson’s cohesiveness. Overall, though, there’s plenty that will have listeners hitting rewind.

Over the past several years, whether through album covers depicting him doing battle with gorillas, his signature “P!” ad-lib, or his rugged rhymes, Sean Price has created an almost mythological Rap persona in the best way. He manages to shift between a purposely sloppy, raw delivery (third verse in “Pyrex”) to surgical rhymes seamlessly, which accentuates each style all the more. He is living proof that “old school” concepts can exist and sound fresh in 2012. It’s a matter of execution, and in that regard, fans will have little to complain about.