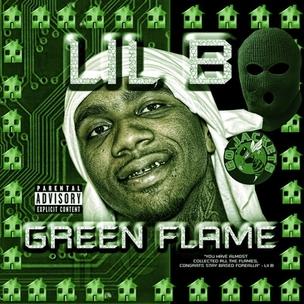 Has Lil B become Lil Bitch? His latest generous musical offering, Green Flame, suggests so. Not, you understand, because he uses the word “bitch” a lot (although he does), but because there’s a tangibly meaner and more menacing streak to the album, with B’s content veering towards a nastier and, well, bitchier zone. When he spits, “I hate these stupid bitches who be lying all the fuckin’ time,” it’s like what Lil B really really wants is to become a member of Kreayshawn and V-Nasty’s White Girl Mob.

Of course, this malicious tint to Lil B’s music shouldn’t come as a surprise. After all, via his Twitter feed he’s basically confessed to wanting to murder domestic cats by letting them eat house plants that may well be poisonous to them. (I dread to think how many incarnations of Keke the irresponsible Based God has already been through.) So here he’s dropping rapped threats about he’s “Got a crime fetish/ I got a nine fetish,” and detailing how he’s perched up high with “that scope with the long range.” (Watch out, stray felines!)

Green Flame’s production backs up this vibe. The eerie synth lines that run though “I Go Dumb” bring to mind early New Orleans rabble-rousers U.N.L.V., while “Deals Whoodie” nods its head to ’80s horror music scores. This style might fly with Lil B’s brainwashed followers (and it certainly helps to be brainwashed when attempting to digest his music), but it makes for an unconvincing listen. It’s a point pushed home as Green Flame unravels, as nestled towards the end is the delightful “My Arms Are The Brooklyn Bridge,” which showcases a softer production; you wouldn’t be surprised to hear the instrumental soundtracking an ’80s Japanese video game. It’s a blend that suits B’s flow and cartoonish persona far better, but you have to suffer through the turgid earlier songs to get to it. But then I guess by now Lil B’s followers are used to wading through a landfill’s worth of trash to get to that one Based gem.

Listen to Green Flame by Lil B