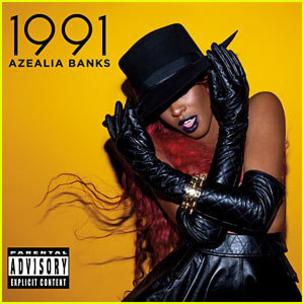 Given the antiquated means of getting a record label’s attention by demo shopping, online viral sensations use YouTube to gain traction within the industry thanks to videos for introductory songs that are visually and aurally enthralling. Harlem’s Azealia Banks has had a seesaw experience since her grand arrival in the glow of the limelight via the internet, as the subject of international fervor amongst fashionistas (including partying with designer Karl Lagerfeld), a friendly acquaintance of Kanye West and Diddy and a critically maligned object of controversy. Carrying on the tradition of her neighborhood’s brash and outspoken character, Banks’ public spats with the likes of T.I., Iggy Azalea, Lil Kim and Kreayshawn haven’t thwarted the buildup towards 1991, her first retail release and a precursor to the Independence Day scheduled mixtape Fantasea.

Following in the footsteps of Uptown’s recent rising star A$AP Rocky, Azealia Banks is a young woman reflecting the duality of street smart urban youth who move seamlessly through Manhattan’s high end Soho fashion district. 1991 draws largely from house music designed for free spirited partying, as its title track, “Van Vogue,” the breakout smash “212” and “Liquorice” all convey a Dance themed feeling while each sounding rhythmically distinct from one another, a key ability as the newcomer sets no boundaries by which she can be pigeonholed. If one critique is to be offered, it’s the length of the EP, with only four tracks. For an artist whose buzz is sizeable enough for an EP, upcoming mixtape, and debut album, more content is both welcomed and suggested for her first go ’round.

Azealia Banks has an endearing charm, magnetic glow, and aggressively attitudinal confidence that come together as 1991‘s short collection is equally catchy and unique rendering her one to continue watching. Her self-empowered routine (achieving the rare feat of shine without the cosign of a male heavyweight) is all encompassing and sure to unify multitudes regardless of sexual orientation, gender, and ethnicity. Having studied and learned from women responsible for powerful artistic statements including Grace Jones (evidenced by the EP cover’s homage) and Missy Elliott’s playful flows, she is potentially poised to become a cultural icon for this generation.