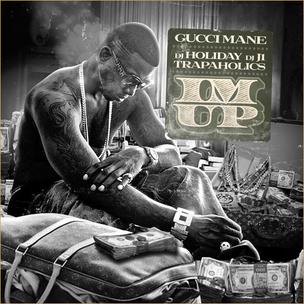 Gucci Mane seems to rarely sleep, so the title of his latest mixtape, I’m Up, is an apt one. Spanning a massive 21 tracks, the project is sure to sate Gucci Mane fans waiting for the face-tatted rapper’s next studio release.

“Without Me” is a somber introduction, with a minor-key flavor punctuated by low-end bass courtesy of Zaytoven. The title track, aided by 2 Chainz, is your standard Gucci Mane fare, as is “Trap Boomin,” which gets the assist from Rick Ross. “Cyeah Cyeah” is easily one of the most interesting productions on the entire record, with Polow Da Don’s time spent with Timbaland on full display. An evolving beat with very full percussion and an eastern flavor lay the groundwork for Gucci, Lil Wayne, and Chris Brown—who continues to make a bid to be taken seriously as an emcee—to work over. It’s a pleasant surprise on a mixtape where much of the production is homogenous. The same can be said of “Get Lost,” which has the Atlanta emcee and Birdman rhyming over something an industrial-sounding bass line, and “Plain Jane,” which plays with that aesthetic as well. When Gucci sounds so comfortable over more interesting production, it begs the question: why doesn’t he switch up beats more often?

What’s most impressive about I’m Up is the supporting cast. In addition to the aforementioned features, Jim Jones, Birdman, Jeremih, T.I., Fabolous, and 8 Ball are among the artists that add some diversity to the project. Sure, most of the time the artists are conforming to Gucci’s lane (see Big Sean on “Brought Out Them Racks”), but they bring with them unique personalities and presences. Even “Scarface” features the legendary southern emcee of the same name—quite the inclusion. No, the features don’t make Gucci step his rhyme game up, but they do make things significantly more interesting.

Whatever criticisms fans may offer of Gucci Mane, the man works the mixtape scene hard. A cursory look at Wikipedia reveals that I’m Up is Gucci’s 27th mixtape; not only that, but it’s the second of this year. Sure, it’s easier to have such prolific output when your subject matter is so narrow you could thread a needle with it, but Gucci delivers what the people want from him: a handful of hard-hitting beats, a few quotables, and some memorable guest spots. I’m Up has an adequate amount of those things to keep things interesting, so if that’s what you want, mosey on to that download link and go to town.

Listen to I’m Up by Gucci Mane