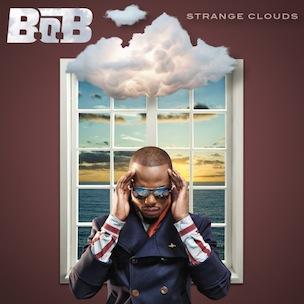 B.o.B. has never been the one to shy away from discovering new musical horizons, and that approach has largely been beneficial to his career thus far. Unfortunately, this same inkling for “different” has proven costly for Strange Clouds, a perplexing project that expands on the popular aesthetics of the new mainstream rather than honing in on what has made him a successful and likewise respected artist from Decatur, Georgia.

To be fair, B.o.B. turning his ambitions toward a more Pop-oriented album is one that many Rap artists have done, whether it be personal choice or label insistence. However, the course in which he pursues this venture falls far short of what would be appropriate for someone in his position. The most obvious example, “Both Of Us,” highlights an inspirational record that based on tone and execution would make more sense on a Taylor Swift album as her hook becomes the focal point of the song. The album’s recent single, “So Good,” also submerges itself into charismatic Top 40 territory. Void of any real purpose aside from singing along to the chorus, it’s arguably one chord away from Kidz Bop Vol. 22. Disappointment comes full circle on (no pun intended) “Circles,” a lollipop record that makes you wonder whether B.o.B. is even willing to acknowledge the fans that embraced him on the mixtape Cloud 9.

His focus seemingly abandoning the notion of Rap, noteworthy tracks such as the lyrically-potent “Play For Keeps” and the compelling “Bombs Away” get overlooked for “Out Of My Mind.” Here we find Bobby Ray playing in Nicki Minaj’s dreamland, with rhymes like “I don’t need this song, I don’t need this speaker / ‘Cause a nigga bring the noise like an Onomatopoeia / Leave him in the dust, all he sees is my Adidas / Na na na na boo boo, wouldn’t want to be ya” cascading against a zany synth beat that could give you an audible seizure. Other guest-assisted tracks like “Never Let You Go” and “Castles” spread B.o.B.’s message too thin, and by album’s end you’re hoping for Bobby to finally come back to earth, but to no avail does this occur.

B.o.B. has been adamant about his latest album being created organically, yet that doesn’t justify the lack of cohesion or quality found on Strange Clouds. There’s no doubt that B.o.B. possesses the natural ability to create remarkable records; whether he chose to use those talents sufficiently is the biggest concern here and going forward.