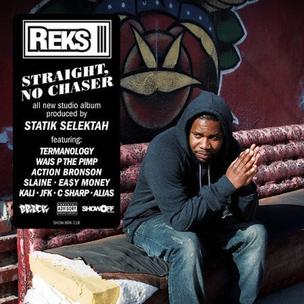 Personal setbacks may have delayed REKS’ emergence as an emcee with exemplary skills, yet it’s clear on Straight, No Chaser that the Lawrence, Massachusetts lyricist has finally hit his stride. Backed by full production from Statik Selektah, with whom he shares an extensive history, this latest project finds REKS in impeccable form as maturity, ability and timing have all crossed paths for a Hip Hop voice that warrants the microphone.

While Statik has been the subject of many rapper-producer projects in the past (Termanology, Saigon, Freddie Gibbs, and Action Bronson to name a few), none match the chemistry felt on Straight, No Chaser. The veteran beat smith rarely oversteps his role with sampled-based cuts that mediate the mood, allowing REKS ample space to forge his lyrical narratives. Such is the case on “Sit/Think/Drink,” a melancholic record that highlights the ills of his community. Sitting back with a pen and a fifth of Hennessy, REKS declares, “Writing poems, thinking back, what was Langston on / When civil rights wasn’t given to our color tone / Pigmentation still be placing us in Section 8 homes / The leaders have left, the efforts is gone.” Then on “Chasin,’” the pressing drums reverberate REKS’ fight for survival tale, bringing the listener along with.

Kept to a minimum, the featured guests blend right into REKS’ agenda including the back-and-forth musings of “Riggs & Murtaugh” with Action Bronson, as well as his collaboration with Slaine. Built on aggressive production from Statik, the title track brings out the best in the two rappers, with Slaine arguably seizing the win. It comes as a surprise then when the trio found on “Such A Showoff” doesn’t hold up their end of the bargain, with a usually spry Termanology settling on flimsy metaphors. Showoff brethren JFK and Kali also turn in less-than-stellar verses, as a menacing beat from Statik unfortunately goes wasted.

A familiar strength from last years’ release, REKS delivers a handful of topical, personal tracks in “Regrets” and “Parenthood” that would make his Best Of compilation come retirement. On the former record, a reminiscent Corey Christie assesses his life over a soulful melody, displaying a sense of pride that is discernible in his lyrics. “Parenthood” takes a more indirect approach, with REKS discussing the misery that comes with being a parentless child. A father himself, REKS admirably tackles the issue with a pristine view that few of his peers could replicate.

As the title suggests, Straight, No Chaser delivers REKS’ story without a filter and the results certainly won’t go unnoticed. With two outstanding albums in consecutive years, REKS has positioned himself as a go-to lyricist for today’s audience that still craves a message in the music.