Moka Only and Ayatollah - Bridges 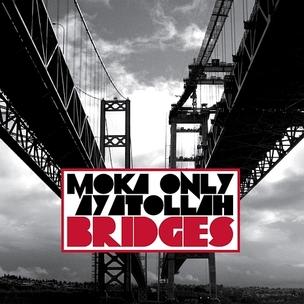 Moka Only must be Canada’s most fecund emcee, if not the world’s. The one-time Swollen Members-member has released a staggering 54 solo projects and 15 collaborative efforts since 1995. For his 55th, Moka teams with indie producer extraordinaire, Ayatollah on Bridges – a 20 track tour de average spit, entirely from the perspective of his eccentric alter ego, Ron Contour.

Ron Contour rocks an off-kilter flow almost to a fault. Where MF Doom or half the members of The Wu, for example, take an angled approach while still resonating through bravado and bombastic narratives, Moka Only often sounds like he’s allergic to the rhythm, resolute in kicking random thoughts. Whether intentional or otherwise, the result is a pretty dense listen. Finding a compelling quotable is like mining for gold during an Alaskan winter. “Watching Netflix plotting / Yeah, you’re spoiled rotten cause I’m always dropping albums like a rusty baton,” he raps on “For The Country,” bookending his prolificness with a head scratching simile. He continues with “You don’t even know yourself / You must be a fawn like a goofy little deer.” Word? Even when snazzy self aggrandizing seizes attention (like “Eckhart Tolle’s” niftily delivered “Caffeine / Tobacco / Underhanded type bandit”), it always seems too soon before another corny bar leaks into the ethos (like the title track’s concluding “Then I get stronger cause I drink energy drink”). It’s as if Only’s only goal was to record everything in one take.

Bridges’ lack of sonic exclamation points adds another frustration. Ayatollah largely loads the album with loops, rarely varying in layers or complexity. His soul sampling is appreciated and absolutely representative of some of Hip Hop’s greatest years. But unexpected grooves or deceptive drums or kicks are almost completely nonexistent, making track after track feel unfortunately redundant. Inevitably, this Nature Sounds release begins to sound like one 50-minute long song. If it wasn’t for the noxious hooks on “Afford The Best” and “Set Up A Mic,” the nostalgic Snap reference in the background of “Come Along,” and “Everything’s” apropos guide to Internet Era Hip Hop (“Everything you thought you knew about rap / Forget”), Bridges‘ might stand as only background music.

Moka Only and Ayatollah earn respect for holding down the entire offering from a strict one producer, one emcee model. There’s no crew love littered throughout the project. There’s no conflicting motivations thrown in to appease a label or pander to a certain demographic. There’s nothing close to commercial perfunctory. None of that. Bridges is an integrity-laced one-time listen. And integrity is always enough to maintain longevity.