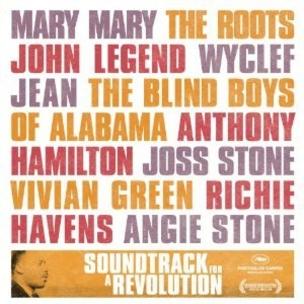 Every year in February, the Civil Rights Movement takes center stage. Although for much too short a time, the nation remembers the unimaginable strength and fearlessness of those who fought for rights that feel as natural today as breathing. Richard and Mildred Loving were jailed repeatedly for returning to their home in Virginia to raise their children. Thanks to their perseverance, their case made its way to the steps of the Supreme Court, where the archaic law banning interracial marriage was finally overturned in 1967. Children went to class while police guards, attack dogs, and epithets from people who simply did not want them there, blocked schoolyard steps. Yet throughout pain and adversity, heads were held high, and music was the place to where emotions were expressed. In the Bill Guttentag and Dan Sturman-directed documentary, Soundtrack For A Revolution, freedom fighters recount the role music played in the Civil Rights Movement. On the soundtrack of the same name, soul music’s biggest artists breathe new life into timeless tracks of change.

Gospel duo Mary Mary kicks off Soundtrack For A Revolution with their version of “We Shall Not Be Moved.” The age-old hymnal reminds listeners to keep up the good fight to benefit the greater good. Wyclef Jean lends his guitar to “Here’s To The State of Mississippi.” The track reveals one of the movement’s deepest scars, the ugly race war that took place in Neshoba County, Mississippi. Jean sings: “Mississippi, find yourself another country to be a part of.” The lyrics reflect the frustration with a state that was one of the last to overturn segregation, and spoke directly to the murders of three young civil rights workers, Andrew Goodman, James Earl Chaney, and Michael Schwerner, who were lynched in Neshoba County.

The mission became even more necessary in the wake of tragedy. The Roots recreate “Ain’t Gonna Let Nobody Turn Me Round,” a song that encouraged freedom fighters to man their seats at segregated diners in peaceful protest, even though fears of being beaten or jailed loomed large. John Legend covers “Woke Up This Morning,” a mantra to get out of bed each day, and stay the course. Angie Stone edges out the centuries-old spiritual, “Wade In The Water,” with a touch of new school soul. The verses reflect on a time when people relied on “walk on water” faith, to get through a path of darkness. Vivian Green’s version of “Oh Freedom” is pure light, an optimistic track that reminds fighters that the payoff from the win will be far greater than any pain endured during the fight.

The soundtrack closes with “We Shall Overcome,” and features all of the artists on the collection, including Anthony Hamilton and The Blind Boys of Alabama. Probably one of the most powerful and widely-recognized songs ever written, it serves as a time capsule for the civil rights movement.

Science says that music releases feel-good endorphins, or oxytocin. For a generation who fought for freedom, the message in the music not only lifted spirits, but reminded freedom fighters of an all-too important end goal. Soundtrack For A Revolution reminds us, as President Barack Obama often says, that we “stand on the shoulders” of the brave men and women who fought for our freedom. For their fight, the nation remains eternally grateful.