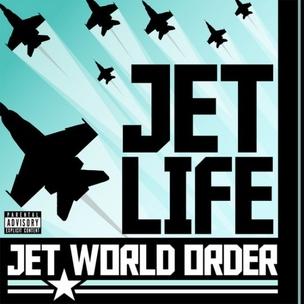 Sometimes a chronic-based lack of ambition can take you a long way. So it is with the Jet Life project, a collaboration billed as “starring” Curren$y, Young Roddy and the improbably named Trademark Da Skydiver, and totaling 13 tracks that are almost identical in sound and scope. But what Jet World Order lacks in enterprise, it makes up for in cohesion, making it a pleasingly consistent listening experience.

Regardless of who’s on the mic, the songs stick to the heard-it-all-before format of largely talking about the pursuit of accumulating cash – which is then rewarded by getting high. The smoke session, in turn, inspires the making of songs about said process. (There’s also the cliched running subtext of guarding your cash against, as the song “Paper Habits” puts it, “pretty women [who] act ugly.”) So the weeded boasts come copious: “Stay alive and high until I’m low in the casket/ Kush scent on my clothes – I ain’t trying to hide my habit/ This that skywalker O.G., you can smell it through the plastic/ Unflavor, raw paper, smoking doobies down to ashes.”

But while none of the crew coin the wittiest or most original of lyrics, they’re rescued by a unified production sound that gels the album together. The beats dwell in mid-tempos and employ airy and mellifluous synth lines; it’s a blend that soothes and relaxes, and gives the short project a sense of sonic unity. You could probably even kid someone that “Nothing Less” is a lost J Dilla production. (The only real aberration from the format is “Blow Up” which, frankly, features a brassy beat that brings to mind a post-festive feast induced bout of flatulence.)

Curren$y and his young charges might have defined themselves with a weed-sodden agenda – but distilling Jet World Order down to such a simple formula has impressively upped the potency of their end product.