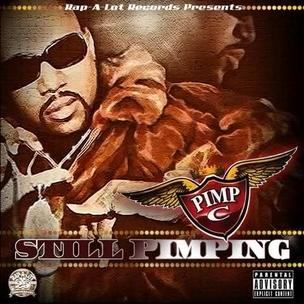 As was the case with Tupac Shakur, the last days of Chad Butler’s appeared to be uncharacteristic. Pimp C, the sonic force and microphone menace from UGK got the #1 album recognition that he and partner Bun B so deeply deserved, and then a new side stepped in. In his interviews and in his verses, the recently-freed rapper/producer began taking umbrage with high-profile peers, in what appeared to be an air of bitterness towards the music industry. Almost five years later, there’s some validity to the points that the Slab Music pioneer made. However, the artist fans tend to think of is a more jovial, comically-crude Butler. While there are glimmers of that on Still Pimping, it more so appears that the prolific artist’s catalog reserves are nearly drained.

“Grippin’ On The Wood”

is one of the album’s finer offerings. Bun and Pimp stay in their UGK lane with brag raps, references to other emcees, and that classic trunk-waving entrance music to the boulevard. Big K.R.I.T., without a doubt a modern influence of the pair, fits in nicely on whimsical percussion with smooth accenting keys. “Like Us,” sounds more like the Pimp C we heard on his two solo albums released while living. The song falls in line with Pimp’s West Coast influences, as the record speaks of gangbang-friendly music and sets. NoCal veteran C-Bo hops on the track, which has a great deal of Soul, with hard deliveries complemented by diced up organ hits. “Gorillaz”

is a polarizing listen. The repetitious “I got gorillas in my trunk” may appear lazy to some. However, this is the tongue-in-cheek style that made Pimp C great. Here, one can hear the influence on Gucci Mane, Trill Fam and others – as the inevitably catchy chorus is supported by clever wordplay that isn’t funny at all, and a beat that knocks like a constable.

“I’m So Proud Of Ya” is plagued by a common problem found in posthumous efforts. Pimp C’s quick verse appears to be about protecting his pimping from poachers, while guests Cory Mo and Hezeleo drag out a record that heads in a direction of just general exploits. “Notes On Leases” and “F**k Boy”

play more into those Pimp C tirades from late 2007, where the pioneer pulled the cards of many of his musical disciples for everything from street credibility to the validity of their trap claims in lyrics. Rap-A-Lot Records and the production team show effort in making these appear like songs, but compared to even last year’s  Naked Soul of Sweet Jones, things are amiss. As has been the case with later 2Pac releases, these come across in large part as unfinished ideas, and a side of the artist never intended to be heard – just sketches from a tumultuous period.

With legal battles in tow, Still Pimping will likely be the last batch of new music heard from Pimp C. Curiously, the instrumental “Pimptro” speaks volumes about what all UGK fans feel – an emptiness in the wake of true musical talent. Chad Butler helped hone a sound that connected Hip Hop to the pages of Iceberg Slim and the backing music of small southern churches. It was a contradiction in of itself, but one that seemed to make so much sense throughout the last 15 years. Still Pimping connects that blueprint to those who recognized it then, and those who will see the sermon through.