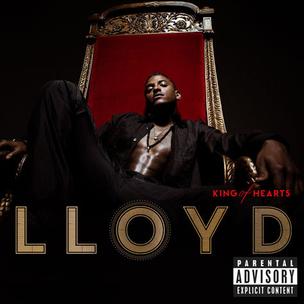 Although Lloyd’s five-year run with The Inc. initially served as a fitting platform for the street-R&B singer, there was always a sense that his potential reached far beyond what Irv Gotti and company were granting him. Now a cohort of major producer Polow Da Don’s growing Zone 4 camp, Lloyd has access to the tangible elements of music that can help him transition into a more polished artist.

At its best, King Of Hearts displays Lloyd’s growth and likewise improved vocal control that the 25-year-old hadn’t fully acquired on his 2008 release Lessons In Love. From his airy, charming voice effortlessly gliding throughout the infectious “Cupid”

to his seductive performance complete with a muted trumpet and delicate guitar strums on “Naked,”

Lloyd sings within his range and does it with such a confidence that you’d want to give him the R&B crown without deliberation.

It comes as a surprise then when he neglects this insight on “Shake It 4 Daddy” with a tumultuously strained wailing hook that airs on the side of annoying. Though bold in approach, this vocal blunder detracts from Polow’s otherwise upbeat production. With that said, this same courage he has built up also provides him with the inspiration behind “Angel,” arguably the standout track of King Of Hearts. Lloyd has never taken on the task of doing a straight-forward ballad. It’s evident here, however, that the “Southside” crooner is capable of constructing intimate serenades – a style often overlooked in an era of Pop-R&B-Electro records that burn more radio airtime. Suffice to say, he’d be foolish to omit this from his repertoire on future releases.

While it’s clear that Lloyd has a good amount of friends in the music business, a handful of tracks become so cluttered with guests that the end results bear a repeat listen. The enlivened bass thumping on “Bang” can’t save Tity Boi’s staccato rhymes, Lloyd’s allusions to Chef Boyardee, nor the flagrant verse from Salo that aimlessly attempts to copy Nicki Minaj. Then on “Luv Me Girl,” Lloyd is outshined by R&B counterpart Chris Brown as they both use the same uninspired delivery to lure girls from the club to their bedroom. Pile on a repetitive hook and the record is ripe for the recycle bin in the left hand corner of your screen. The album-closing “World Cry” goes off the deep end as Keri Hilson, R. Kelly and K’naan join together for an out-of-place performance that sounds like it was sponsored by Red Cross. In retrospect, Lloyd would have been better off with another between-the-sheets type of record like “Lay It Down”

than insufficiently taking on a socio-political stance.

More sexual than sensual, King Of Hearts fulfills the bare minimum of love, lust and heartbreak, all the while showcasing Young Goldie’s affinity for the female body. He still hasn’t entered into the same reliable pantheon that has made the likes of Trey Songz, The-Dream and Usher trustworthy acts, but with glimpses of him singing beyond his years, Lloyd is closer now than he ever was.

Purchase King of Hearts by Lloyd