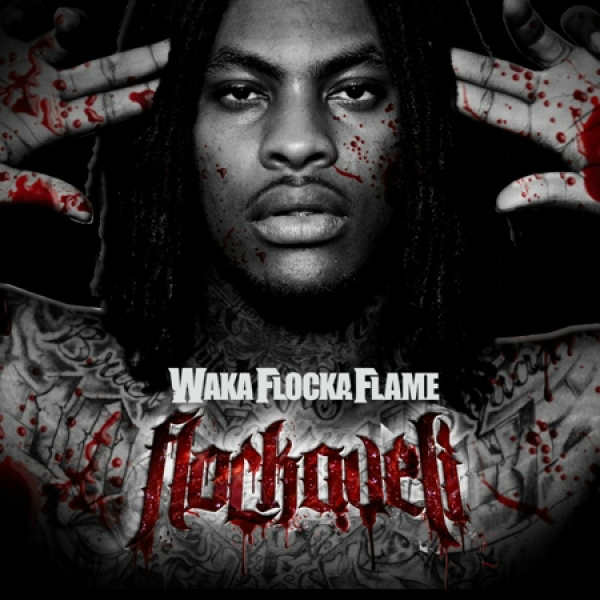 Like Waka Flocka Flame’s entire career thus far, listeners will either love or completely detest his debut album Flockaveli. The Brick Squad sensation is a testament to the dichotomy in Hip Hop that has existed ever since Diddy put on a shiny suit. In one breath, Flocka’s music is entertainment for entertainment’s sake: that chanting nonsensical ranting over thumping beats that can make a keg party come to life. On the other hand, Waka Flocka Flame is merely a piece in the growing problem with Hip Hop as it pushes forward as a mainstream dominant force. Flockaveli stands in the middle of those two worlds – which can be considered a step up from a rapper whose debut singles “Hard In Da Paint”

left him as the punchline in a viral video about Shawt Bus Shawties.

On the album’s opening “Bustin’ At Em”

, the gun cocks and clips swirl around Flocka’s repetition of “Bow! Bow! Bow! Bow!” and “Waka! Waka! Waka! Waka!” In fact, most of Waka’s album relies on incessant chanting, like on “TTG (Trained To Go)” where Yo Gotti and a bunch of others use “shawty” more times than necessary. Add that to “Grove St. Party” with Kebo Gotti where “It’s a party” is shouted on loop, and your vocabulary is whittled down to five words once Flockaveli is finished.

There are some decent high points on Flockaveli that move it past “guilty pleasure” and into “club-ready” territory. “Bang” with YG Hootie and Slim Dunkin use “bang” like it’s a mantra, but the dark beat combined with Waka’s husky vocals transform the track into something of an early Three 6 Mafia joint. Roscoe Dash and Wale check in on “No Hands” and add just enough balance to make the track more like Rap-A-Lot over “please stop rapping.” “For My Dawgs” sounds like it could easily have been slipped into DMX’s catalog unnoticed, which is a compliment. The biggest problem is that Waka Flocka Flame’s “style” is more of an amalgam of the same type of music throughout Hip Hop’s history, making him even less of an individual commodity. Anybody can ideally do what he’s doing, but his manufactured persona has somehow set him apart; which is a feat.

The world understands by now that Waka Flocka Flame isn’t a lyricist by any stretch of the imagination, yet has a seat at the table just like any other rapper out. Flockaveli may be Waka Flocka’s entry into Slap Rap entertainer territory a la Lil Jon. It’s also possible this was his attention grabber for something bigger and better in the future. Remember when people thought Cash Money and No Limit Records were leading to Hip Hop’s demise? Well, Lil Wayne came out of that debate, so anything is possible.