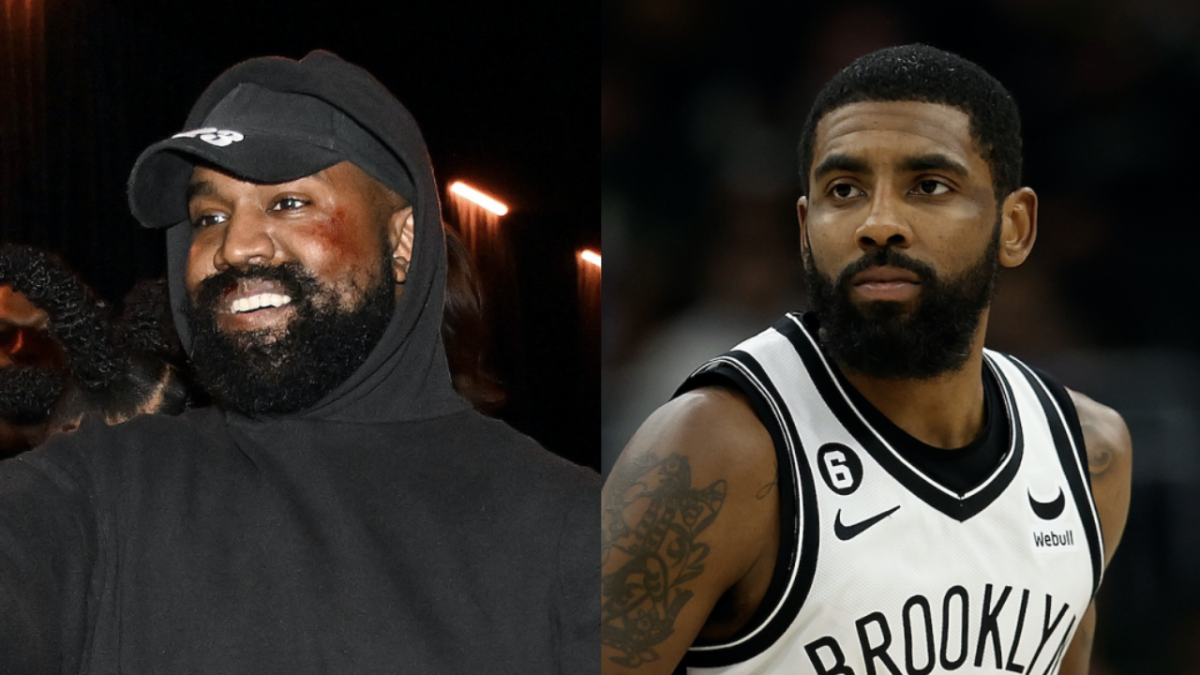 Kanye West is back on Twitter, and his first post came in support of Kyrie Irving, who has also faced backlash for alleged anti-Semitism.

Less than a month after having his account locked after vowing to go “death con 3 on JEWISH PEOPLE,” Ye returned to Twitter early Thursday (November 3) and shared a cryptic photo of the embattled Brooklyn Nets star looking into the camera and holding a basketball.

Kanye didn’t include a message with the photo, so his intention behind the post is unclear.

Yeezy previously supported Kyrie Irving on Instagram last week by claiming he was one of the last “real ones” amid a posting spree that resulted in him being suspended from the platform yet again.

The Chicago native had trouble tagging the NBA All-Star in his post, though, as he later shared a screenshot of him searching for Kyrie’s verified account, only to see a swarm of fake pages.

In his caption, Kanye blamed the hitch on the “red media,” a term he previously used to describe media companies that are purportedly ran by Jewish people and have “teamed up” on him.

Kanye had, in fact, misspelled Kyrie’s name as “Kryie” in the search bar.

Like Kanye, Kyrie Irving has recently come under fire for alleged anti-Semitism after he tweeted a link to a controversial film called Hebrews to Negroes: Wake Up Black America.

After initially refusing to backdown, Irving, along with the Brooklyn Nets organization, announced on Wednesday (November 2) that they will each donate $500,000 to “causes and organizations that work to eradicate hate and intolerance in our communities.”

“I oppose all forms of hatred and oppression and stand strong with communities that are marginalized and impacted every day,” Kyrie said in a statement. “I am aware of the negative impact of my post towards the Jewish community and I take responsibility. I do not believe everything said in the documentary was true or reflects my morals and principles.”

He added: “I am a human being learning from all walks of life and I intend to do so with an open mind and a willingness to listen. So from my family and I, we meant no harm to any one group, race or religion of people, and wish to only be a beacon of truth and light.”

Joint statement from Kyrie Irving, the Brooklyn Nets, and the Anti-Defamation League pic.twitter.com/5szamIClsh

As for his own anti-Semitic controversy, Kanye West apologized for his offensive comments in an interview with Piers Morgan last month, but has continued to attack Jewish executives and business figures he claims have an agenda against him.

The Donda rapper has been dropped by a number of organizations and individuals — most notably adidas, who terminated their lucrative Yeezy partnership on October 25. Ye’s net worth subsequently plummeted from $1.9 billion to a reported $400 million.

The fallout could carry an even higher cost for Kanye, who earlier this week revealed his former lawyer warned him he could lose custody of his four children over his anti-Semitic remarks.