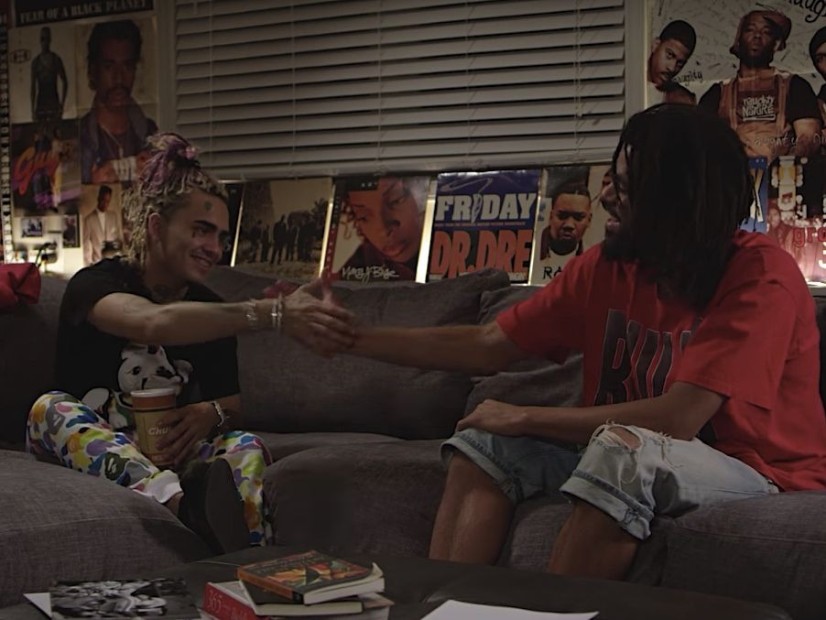 DJ Akademiks teased an interview between J. Cole and Lil Pump earlier this week and now, the full conversation has arrived. The two rappers sat down at The Sheltuh in North Carolina for an intimate one-on-one conversation.

After they met in Miami at Rolling Loud 2018, Cole says they eventually got on the phone. He says he quickly realized Pump was a lot smarter than his image portrays.

From their childhoods to the first raps they wrote, Cole and Pump go over a myriad of topics, and the Dreamville boss’ jaw drops when he finds out Pump just started rapping in 2016.

The topic soon turns to Pump and Cole’s perceived beef, which skyrocketed following the release of Cole’s KOD track, “1985 (Intro To ‘The Fall Off’).”

Pump explains, “I was sitting in a room one day and I seen that shit in my comments like, ‘Fuck J. Cole, fuck J. Cole.’ Now I kinda get it. You make a different type of music, so people feel some type of way like, ‘Fuck this, fuck that.’ I started doing it, so people were like fuck it.

“Now everybody’s saying fuck Russ. People just like doing that shit. It wasn’t even serious. I fuck with your shit. Your shit is hard, bro.”

Cole thanks him for the compliment and explains why he thought sitting down with the “Gucci Gang” rapper was a wise move. He admits he initially thought the music coming from the newer generation of rappers was subpar and had him feeling emotional.

“It was like two years ago, I seen one of the [XXL] freshman freestyles and I was like sad,” Cole explains. “I was like, ‘Damn this shit really over.’ I know now that I was wrong. All I was doing was being afraid that the thing I fell in love with was no longer relevant or respected. In that moment, it brought fear. Now in time, I realized like, ‘Nah that’s not true.’ This shit is just taking another course. It’s just another branch in the tree. These kids are starting something new. They doing they own thing. They doing what they want to do and having fun with what they want to do. Hip Hop was started like that. ”

Pump appears to nod in agreement as Cole continues expanding on the topic.

“I’m playing your little EP, like, ‘Damn, this shit hard. The songs are short and this nigga got funny ass lines.’ I’m laughing in the car like, ‘Yo this dude is funny.’ It ain’t nothing like I grew up on or even what I make or what I prefer, but it’s like what am I gonna do? Be scared of this? Deny this? Deny you expressing yourself however you want to do that? Over time, I’m like, ‘I’m tripping’ and resisting this shit when really I should be accepting this shit.'”

As the conversation came to a close, Cole reveals he believes the only way to move forward with Hip Hop is to embrace its evolution.

“I did the ‘1985’ shit maybe like a year or so ago,” he says. “That’s when I didn’t understand what was going on all the way.  Real way is to embrace you and show love. When we talked on the phone and I met you in person, in that moment I’m like, ‘I love this little dude.'”[apple_news_ad type=”any”]