With 2008 coming to an end HipHopDX has teamed up with Wordsmith to present his latest mixtape for free download!

Before we jump into 2009, we’re presenting Wordsmith‘s 2008 Resolution & Re-Cap Mixtape. In which we’ll let the man behind the music speak on:

“As everyone is deciding what to do for New Years I say hey, let me fill some of your time with good music. I’ll recap my top internet releases while I seek resolutions on a variety of topics. If you’re always on the run and feel like time is of the essence, then you’ll directly relate to the Street Level produced “Not A Second to Waste”. Others will get a kick out of dreaming like they’re living the lavish life of an artist in the Strada produced “Senor Wordsmith.” Throughout the year we all experience the judgments will place upon people and the one’s we receive, so let me fill that fix with “Hip-Hops Cold Shoulder”, the Professa produced “Judged in Da Cipha” and “Game, Set, Point.” For the times you felt confused and lost seek the light of “Levitation” and the Guitly J produced “The Ghost in My Dreams.” Finally, find forgiveness and let those resolutions shine bright with the Rednaz Beats produced “That Feel Good Flow 2: The Goodness, “Peaceful Journey: Blue Waters,” and the Wigged Wax produced “Wordz for Remediez Remix 2004.”

As I take a breath…let me introduce ya’ll to the people who took part in project. Big thanks to Excetera, DonnyGoines, Skyzoo, UnLearn, RAtheMC, & Kimia Collins for blessing me with some bars for the mixtape. A special thanks goes to my crew, The Nu Revolution Camp. Much luv to my cousin Black Knight and my boys Kontact & D-Dub for believing in my product throughout 2008 and beyond. You guys have hung on so far, so lets make an ode over the internet and to millions of people to make great music, be professional, and do what doesn’t seem possible to the average artist. I’m leading the way, just follow my lead and lets build the blueprint to success together.

Next, I have to shout out the producers!!! I am honored to be able to work with my brother Professa through this music, but in the end he is my number one fan as well. He is the definition of a big brother and a friend. Next , I have to show luv to my homie Strada up in Canada for having faith in me for the last 4 years of this grind. We will make alot of hits together and form that epic team like the greats. Next, my homies in Sweden, Street Level, thanks for providing those street heaters for me. You guys embody the essence of 90’s Hip-Hop and soul. Finally, I have to take a bow to my homie Capish in Poland for being my engineer and one of my producers for the past 4 years. This guy represents Nu Revolution to the fullest and is honored to be apart of it. Pish puts up with my annoying sense of detail during the mixing of my tracks and for that alone, I bow to you my man. I can’t forget to thank my man Rednaz Beats for blessing me with his European style of Hip-Hop and I plan to make some hits with him as well. I want to clap it up for Guilty J for providing the beat that brought “The Ghost in My Dreams” story to the light. I’m picky about who I work with, but bravo homie. In closing, I will take another bow to my first and only Deejay to date DJ Dublee. This is the first time he has done a mixtape of this caliber and he killed it. He delivered my mixtape with the seriousness of DJ Premier. He only had a day as well and he did a great job.

My next to last shout out goes to my man DJ Andrew in Boston. He offered his services to me 4 years ago and he is hands down one of the loyalist people I have met in my lifetime. That’s the funny thing too because I have never met him or even spoke to him on the phone, but he has been my Web Tech for sometime and he has never let me down. I know this, I will make sure that guy is rich one day.

For the finale, I want to say thanks to HipHopDX for Supporting all 4 of my mixtape releases in 2008. I am an unsigned artist on the grind and they saw enough in me to support my product. Still, it was my man Joel (Shake) who for the past year and half has given me a forum on the biggest Hip-Hop site on the net. He is the blueprint for the old school A&R, the one who actually still listens to music and would check a band out LIVE to see if they were worth signing. I look forward to alot more work with you guys in 2009 and beyond.” 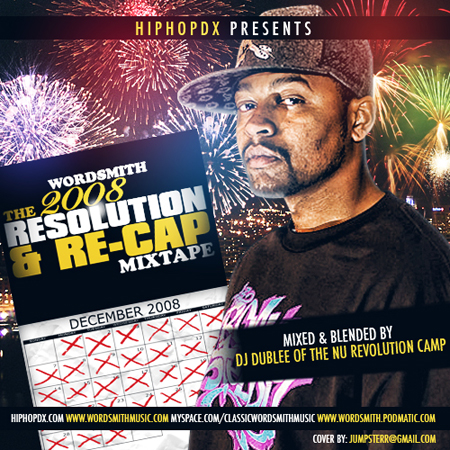 02 Not A Second to Waste (prod. Street Level)

In 2009 look for the brand new mixtapes from Chubb Rock & Wordsmith, A Crack in the Bridge mixed and blended by DJ King Assassin; Wordsmith‘s Music for the Masses and 2009 Mid-Year Review; The Nu Revolution Camp‘s Flag of Our Fathers & The 2009 Recap & Resolution Mixtape. Also, look for Word‘s debut albums Bridging the Gap with the legendary Chubb Rock, A Baltimore Martini (UK Album with I.N.C The Poet) and his personal debut Vintage Material.