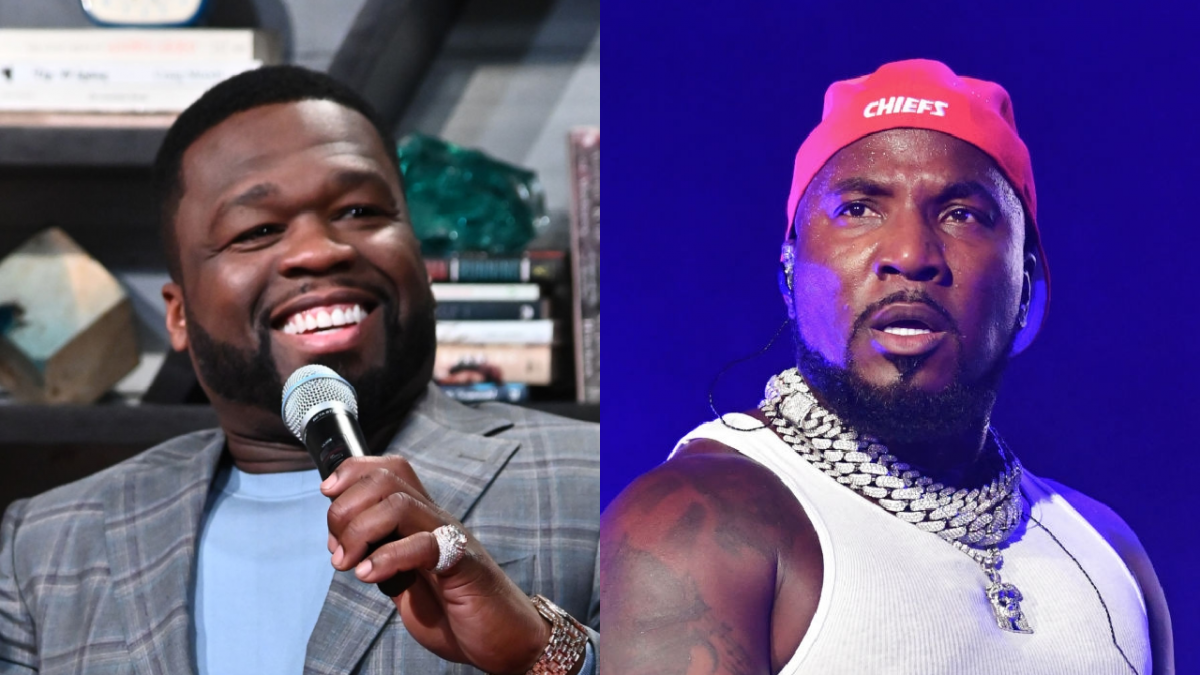 Gucci Mane and Jeezy put their long-standing beef to bed during their iconic Verzuz battle in November 2020, but perhaps Gucci fell into old habits when he threatened to reignite the feud on his new song “Rumors.”

Released earlier this week, the Lil Durk-assisted track finds the Brick Squad bully taunting Jeezy over his dead homie, Pookie Loc, who Gucci allegedly shot and killed in self-defense during a robbery attempt in 2005.

“D.A. dropped my murder, didn’t have evidence to prove it/I think my house is haunted, yeah, by who? The ghost of Pookie,” he raps on the Tay Keith and DJ Meech-produced record.

50 Cent, who has previously traded shots with Jeezy and clearly enjoys stirring the pot between the Atlanta rappers, shared his reaction to Gucci Mane’s lyrical taunt in an Instagram video posted on Wednesday (January 26).

Wearing his trademark headband from the early 2000s, 50 discusses Gucci’s beef with Yo Gotti (who he also appeared to take aim at on the song, rapping, “He ain’t killed nobody but keep rapping about the shootings”) in the back of a car before reciting Guwop’s “Pookie” line and laughing.

“That n-gga said, ‘I think my house is haunted, yeah, by who? The ghost of Pookie,'” 50 chuckles while doing his best Gucci Mane impression.

Jeezy has yet to respond to Gucci’s “Rumors” line (or 50’s trolling), and considering he and his wife, Jeannie Mai, recently welcomed their first child together, it’s safe to assume parenthood takes precedence over rap beef for Snowman right now.

Curiously, Jeezy and Gucci are set to hit the road together next month on the star-studded Legendz of the Streetz Tour, which also boasts Rick Ross, 2 Chainz, Fabolous, Trina and DJ Drama on the bill.

As for Jeezy’s feud with 50 Cent, tensions rose in 2020 when the Power mogul put him on blast after Black Mafia Family kingpin Terry “Southwest T” Flenory arrived home from prison.

“Big T said get Jeezy ass too,how you Screaming BMF Who helped you get a record deal,” 50 wrote on Instagram. “Then Meech mom is calling you and texting you to let you know ‘T is home and You ignoring the phone calls. so now his mom said fuck the backstage passes and free tickets to the concerts pick up the phone N-gga. @jeezy #starz #BMF coming soon.”

Jeezy fired back on his The Recession 2 track “Therapy For My Soul.”

“Grown man playin’ on Instagram, real sucka shit/Why the fuck this clown n-gga playin’ with my legacy/Solid in these streets, that’s some shit that you will never be/Talking ’bout power, but weak n-ggas do the most/In real life, n-gga you really borrow money from Ghost/All that lil’ boy shit, yeah it make it evident/Made millions in these streets, what the fuck is 50 Cent?” he rapped.

50 responded just hours later, calling Jeezy’s music “trash” while dismissing his jabs as a weak attempt to promote his album.

“Anything to try and sell a record guess?” he clapped back on Instagram. “I’m not available this week, FOR LIFE is coming on at 10pm tonight. i’m busy. LOL #yourshitistrash.”