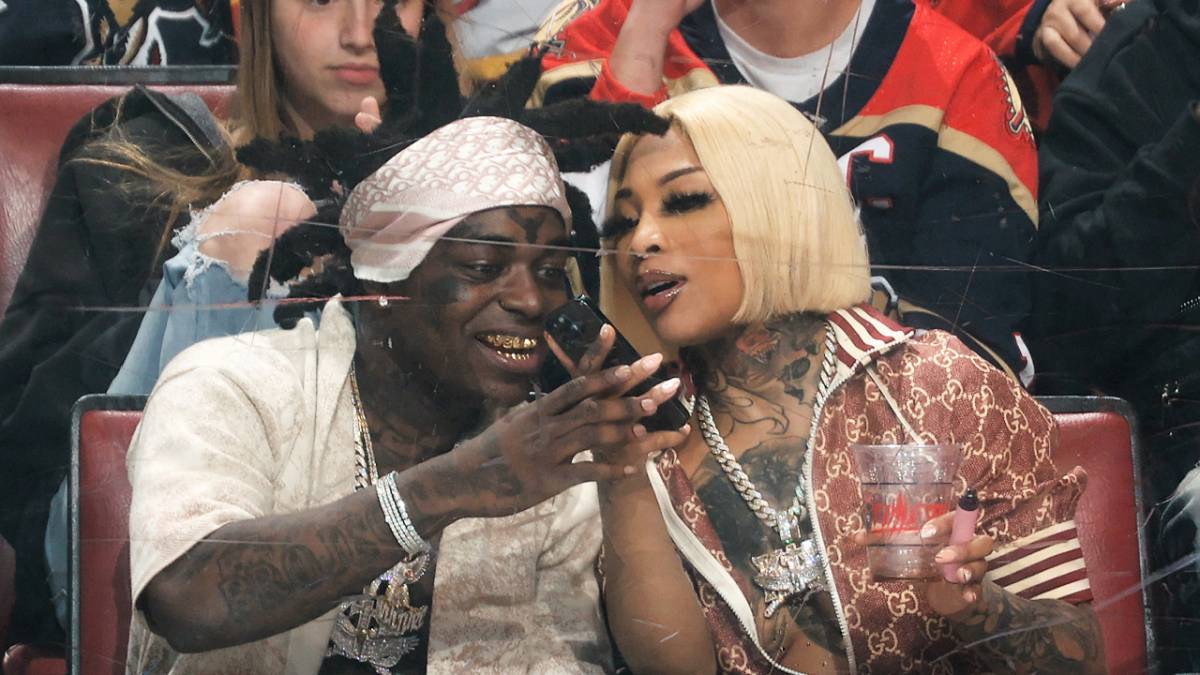 Kodak Black caused quite the stir at the Florida Panthers’ NHL game on Tuesday (January 11) when he was filmed “having sex” with a lady friend in the stands. Turns out the woman was simply twerking on Kodak, but that didn’t stop the moment from making headlines and fueling jokes on social media.

During an Instagram Live video on Wednesday (January 12), the “Super Gremlin” rapper heaped high praise on his date — an up-and-coming rapper from Atlanta called Vvsnce (pronounced “Essence”) who appears to be signed to his Sniper Gang label — by crowning her the “hottest” female rapper in the game right now.

He also clarified that he and Vvsnce aren’t in a relationship, despite her calling the Florida Panthers game their “second date.”

“That ain’t my girl, I’m still single, I’m still cutting. But that’s my artist and I believe in her,” he said. “I swear to God, she’s the hottest female, bro. Everybody ain’t even really on her trail right now, but she harder than all the [female rappers]. Ain’t no female seeing her, I swear to God.”

Kodak Black is already using his platform to help put more people on Vvsnce’s trail. Following their NHL antics on Tuesday night, Kodak shared a preview of a collaboration with his Sniper Gang signee on Instagram while showering her with more lofty praise.

“@vvsnce This Girl Talented Af !!! The Hardest Female Rapper Fasho !!!!” he wrote. “Ion Even Listen To Girl Artists , I Definitely A Vibe To Her Shit In The Car ….. Fuck All Da Other Shit I Wanna See Her Take Over This Music Shit In Da Female Category.”

Kodak Black may not be romantically involved with Vvsnce, but that doesn’t make his love life any less complicated. Last February, he reportedly got engaged to fellow rapper Mellow Rackz, just days after shooting his shot at City Girls star JT.

Then, in December, Kodak was filmed putting a ring on another woman’s finger — 24-year-old real estate agent Maranda Johnson — with whom he’s expecting a child.

Kodak attempted to clear up the confusion surrounding his relationships during Wednesday’s Instagram Live recording.

“Even though we ain’t together … you can holla at me if you need something. It’s always understood,” he said. “If I’m dealing with a person, I don’t ever lead them on or make them feel like we in a relationship if we not. I always let you know what I got going on in my life, so you can make the decision if you want to deal with me or not.

He added, “I got another baby on the way, I’m gonna come through the same way: ring, baby shower, Benz, foreign, all that.”

Making the situation even more confusing, Kodak later revealed his dream girl is still out there, although he didn’t reveal her name.

“The girl I want, for real, she knows who she is,” he said. “I don’t think I gotta say her name… but if I have to, I would. That’s who I really want and I’d change my life for her.”

The Florida rapper’s crush might be Cardi B‘s younger sister, Hennessy Carolina, who he’s pursued on social media for years. Most recently, he tagged her in an Instagram Story that read, “@Hennessycarolina need to marry me. I’ll be a good boy.”