Rick Ross was dragged from here to Zamunda in 2017 when he made some horribly misogynistic comments about female artists. During an interview with The Breakfast Club, he was asked why he hasn’t signed a woman to his Maybach Music Group imprint.

He replied, “You know, I never did it because I always thought, like, I would end up fucking a female rapper and fucking the business up. I’m so focused on my business. I just, I gotta be honest with you. You know, she looking good. I’m spending so much money on her photo shoots. I gotta fuck a couple times.”

The backlash was immediate, with HipHopDX publishing an editorial slamming Ross’ comments that went viral. The following day, Ross (or somebody on his PR team) issued what sounded like a heartfelt apology, but this type of behavior is evidently engrained in Ross’ personality.

Nonetheless, Ross tells her, “Your future is bright” as another woman stands behind him rubbing his shoulders. Kaiya, wearing a slightly more conservative ensemble, goes next and puts her obvious vocal talents on display. But she’s cut off and Ross tell her, “That wasn’t the best platform for your voice.”

The music industry in a nutshell.. pic.twitter.com/kOrlBGKqhI

In another Signed clip, Ross admits he essentially favored Just Brittany simply because of her looks. The roughly one-minute video shows Ross pawing all over her, playing with her hair and kissing her neck in what looks like an attempt to seduce her.

“I may have given Brittany special treatment,” he says. “She was attractive. I was kicking it with her. Not only that, I showed her a little extra love maybe because me working with Trina, seeing the success and you know once you work with somebody, there be things that you seen and things you knew you would’ve done different, and I kind of wanted to apply those things to her. Of course I had a fun time with her. I was flirting with her, but at the end of the day I really wanted to see her win.

There you have it pic.twitter.com/PItkbMWUQu

The first episode of Signed premiered in July 2017 and ran for one season before it was canceled. As explained in the description, aspiring Hip Hop and R&B artists are presented a “once-in-a-lifetime opportunity” to collaborate with Ross, Grammy Award-winning songwriter The-Dream and industry executive Lenny S. After fine-tuning their craft, the artists face challenges, eliminations and a finale performance showcase. The ultimate winner has the opportunity to be signed to one of the mogul’s record labels.

Ross’ initial apology came in July 2017 with a promise to change his outlook and the way he speaks about women.

“I want to address an insensitive comment I made on a very sensitive issue, especially in a minority dominated industry like hip hop,” the statement read. “My entire empire’s backbone is led by 2 of the strongest people I know and they happen to be women, my mother and sister. The operations wouldn’t run without them and I have the highest regard and respect for women in this industry. I have a daughter myself, my most cherished gift in the world.

“My comment is not reflection of my beliefs on the issue. A mistake I regret. I hope to use my mistake, my platform and the community to create positive discussion to implement change on a very important issue. respect for the ones who stand up to say hey that isn’t right. Now it’s time to accept responsibility and all do better.” 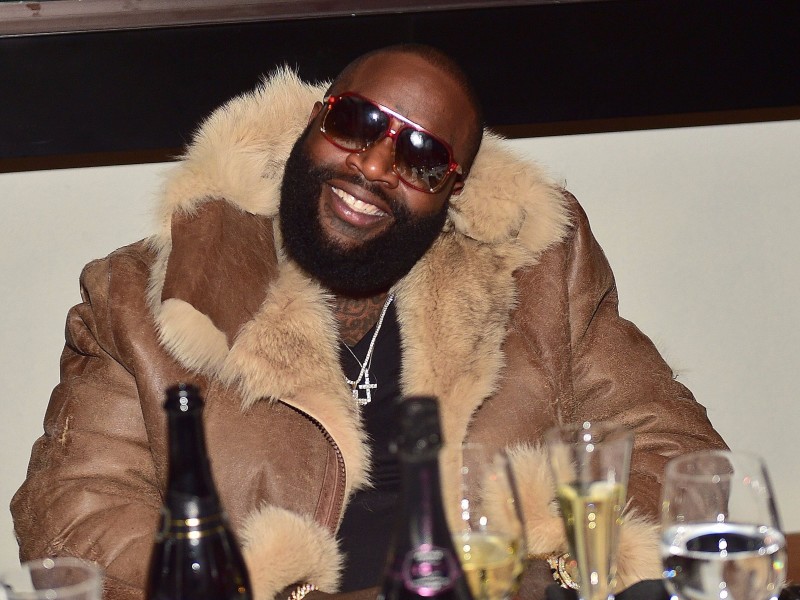 Rick Ross' Comments On Female Rappers Are Every Woman's Nightmare

But judging by Ross’ 2019 video for “Nobody’s Favorite,” misogyny still runs rampant in his world. The visual features scantily-clad women throwing their booties in the air as Rozay raps, “Bad bitch sucking dick, ’bout to dent my rim/Duffle bag full of hundreds, let her spend my tens.”

Check out some of the reactions to the viral clip below.

Rick Ross is the Harvey Weinstein of the music industry and he's admitted to it. He's only going to sign a woman to his label if she fuck and suck him. Plain and simple.

Y’all really surprised misogynistic rick Ross chose ass and titties over talent when he made statements like this… and song lyrics like this…. pic.twitter.com/iP1hS7jJRH

Kaiya had the range. The vocals. Everything and is so pretty. Rick Ross downbad. https://t.co/T2tPJ8TNyd

We goin support you bby. ❤️ Rick Ross is a clown for playin you like that.period. https://t.co/pXy3piLs8u

When I remember Rick Ross is a CO I just understand all goofy shit he does.. nigga a fraud, he stole someone else’s identity and till this day he hasn’t comepensated the real Rick Ross. Clown 🤡 pic.twitter.com/Nd0z8nQzyP

The only problem I’ve ever had with Rick Ross is when he went on the breakfast club and said would never sign a female artist unless they was fuckin…..

Rick Ross nasty ass said this in a song!! That man ain't seeing the pearly gates he so foul pic.twitter.com/3cN5DNU91b

this is actually disgusting https://t.co/I7FE0HhRCe