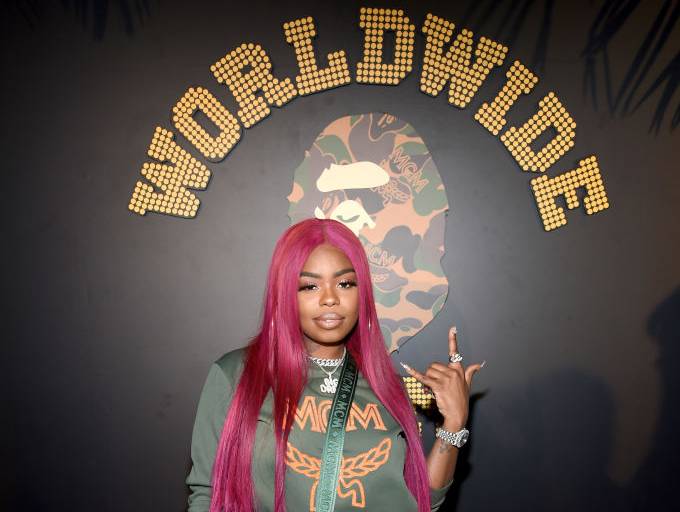 Chicago, IL – For Chicago native Dreezy, being a rapper is truly her profession. Her bars are vicious and the punchlines hit with laser-like precision. When she dropped her freestyle to Nicki Minaj‘s “Chiraq” in 2014, listeners were put on notice that a fresh, young rapper out of Chicago was next on the Hip Hop scene.

After her breakthrough moment, Dreezy signed a deal with Interscope Records in 2014 and went right to work putting out two EP’s, a debut album and a mixtape in four years. Her debut album, No Hard Feelings, spawned two hits in “Close To You” featuring T-Pain and “Body” featuring Jeremih with the latter becoming her first platinum-selling single.

2019 was Dreezy’s biggest year yet as she not only received a Grammy nomination for her contributions to Dreamville’s Revenge of the Dreamers III compilation album but she explored other ventures outside the Hip Hop game. She starred in the 2019 Netflix film Beats and became a brand ambassador for Puma.

“I’m a boss and a hard worker,” she tells HipHopDX backstage at Puma’s Hoops Pop Up event in Chicago. “I love being big. Whatever I do you know it’s going to be big.”

Dreezy is in her hometown for NBA All-Star Weekend and she’s repping for Puma in a big way. She’s making appearances at events and talking to other big corporates about what the Puma brand is cooking up for 2020. “I respect [Puma],” she adds. “They’re like a family and it’s inspiring to see how they stay connected to hip-hop and black culture. This partnership is teaching me how to be more of a businesswoman.”

Even though Dreezy is stepping into the business world she hasn’t forgotten about her music background. She released her first musical offering of the year in her fiery remix to Nicki’s “Yikes” and is working on a new album set to drop later this year that she feels will be her biggest project to date.

“I’m still rapping and still working at the same time,” Dreezy says. “I’m recording my ass off. I want this album to be perfect.” Dreezy has her sights set on being a force in the music industry and with a promising start in her other ventures, she’s living up to her name Big Dreez.

Elsewhere in the conversation, Dreezy spoke more about her work with the brand, why her next album is going to be the hardest album a female rapper has ever made, what rapper she wants to test her bars against, her “Yikes” remix and more.

HipHopDX: What does it mean to be a brand ambassador for Puma and coming to your city and being at all these events?

Dreezy: This is just a big accomplishment for me to be a brown-skinned girl coming out of Chicago working with such a worldwide brand. I love working with Puma. They respect the artists and they are very supportive and they’re very creative with what they’re doing.

HipHopDX: How hands-on are you with this partnership?

Dreezy: I have creative control over what I do on my end. Any photoshoot you see me do or anything else, it’s me coming up with the creative direction, finding the photographers, getting the glam done and styling the outfits. I got out and I find custom designers to make dope stuff out of all the Puma merch. I try to keep it fun and new.

HipHopDX: Why align yourself with Puma when there are other brands like Nike and adidas making moves with their collaborations?

Dreezy: I’m not going to lie there have been other brands who offered to get me a part of their team but I just felt like Puma was real from the start. They were so excited to work with me and instantly started flying me out and sending me so many products. I like the new style too it’s really dope. It’s just about the brand and what they’re putting into the whole actual fashion of it. I’m a fashion girl so I like their stuff. It’s comfortable.

HipHopDX: What goes into this partnership? Puma has been doing a lot with several rappers.

Dreezy: I do a lot of panels with a lot of dope influencers. We do a lot of traveling and I would go and the whole Puma staff is there and we’re talking to other people and doing fashion shows. I think it’s opening my eye to how brands work and how big of a brand it is because it’s like you go to the store and you see what they’re doing. Puma is really out here and working with legendary artists like Nipsey, Meek, and J. Cole. It just feels like somewhere I fit in.

HipHopDX: Now that you seem to have a solid footing in other ventures like fashion and film. What’s happening on the music side?

Dreezy: I’m recording my ass off and working on my album. This next album is going to be really, really special to me. I’m really hands-on with it and I want it to be the hardest female rap album ever. I feel like if there’s anybody that got the range to do it is me. I’m taking my time with it but it’s going to come out this year.

HipHopDX: It sounds like you’re going into your bag for this next album.

Dreezy: I feel like I’ve done so many projects before I was signed that when I got signed to a label it was just so many opinions and hands-on my craft that I think I got a little lost with what my direction was and what my fans wanted from me. This next album is really just getting back to my roots, what I know my fans want from me and me really expressing my true self. It’s going to have a little bit of everything like bars and that energy but it’s going to be a little personal too.

HipHopDX: There’s a lot of talk about female rappers fighting for the “Queen” title. Do you care about that title?

Dreezy: Ever since I was a kid I never wanted to be a queen. I always thought princess was a cuter name but I don’t even want to be that either anymore. I like my title Big Dreez. As far as being the queen of something, we’re all queens. There are so many queens in the industry so you can consider me a queen but that’s not my only title. Even with the whole female thing, a queen is just a female. I’m above the kings and queens so, I don’t know, we need to come up with a new title for that [laughs]. It’s just royalty period, you can’t box me in.

HipHopDX: How do you view your journey from where you started to where you’re at now in your career?

Dreezy: I started in Chicago rapping on the block and making videos. We made it happen on our own and the city came out and supported us by being in the videos. All that turned into a corporation to where I’m working with big businesses and signing deals with brands and I think I just elevated and took it to another level to where people take me even more seriously. It’s been a blessing.

HipHopDX: How are you tackling your music in the new year?

Dreezy: I’m being very direct in my music. I’m giving specifics like being more personal. I think on my last project I was being so broad like rapping about money or some turn-up. So many people listen to music to express themselves in ways that they can’t speak it. There’s a lot of people going through pain or relationship problems, especially females. I feel like I have a voice for females and I have to speak for them. It helps to have that female perspective and even just us being able to pop our shit like that.

You go to the club and you hear Future rap “I ride for my niggas I lie to my bitch” and you see all the girls looking salty. Now, it’s like ok let me speak up for my ladies so we can have our own line like “I ride for my bitches, I lie to my nigga” [laughs]. That’s what I do it for. I want girls to be able to express themselves more. We’re so silent sometimes and male presence is so strong that they try to just push us in a corner and I feel like we have a voice now. We’re at the forefront so talk your shit queen. That’s it.

HipHopDX: Let’s talk about that “Yikes” remix. What made you want to hop on that?

Dreezy: There’s a lot going on right now. There’s a lot of changes happening in my career. I got more control over what I can and can not do now. The first thing I wanted to do was drop some music. I know my album isn’t ready to be put out yet so I wanted to remix something. That’s how I started my career when I did my “Chiraq” remix and that helped me get my record deal. So I just went back to doing what I know how to do. I know how to get on other people’s beats and fuck it up. I just did it real quick and it was just something fun to do and keep you on your toes. You can bop to this until the album comes.

HipHopDX: You’ve proved you can hold your own on tracks with rappers like Kash Doll, Wale and Gucci Mane. Who’s an artist you’d want to collaborate with to test those bars you have?

Dreezy: I’m not going to lie, I want to do a song with JID because I feel like he’s somebody that’ll challenge my bars. He’s one of the greatest rappers that’s out right now. I would love to go bar to bar with Chance the Rapper. Even though me and G Herbo got so many songs I always love getting on a track with him because I feel like I be giving it to him to where he needs to keep  up with me. I just want to get in the studio with people who really know how to rap. Female wise, I would love to go bar for bar with Young M.A. We did the “ThotBox” remix and I feel like every girl on the track held their own, but I just would love to do it with some like real lyrical females that do this shit for a living.