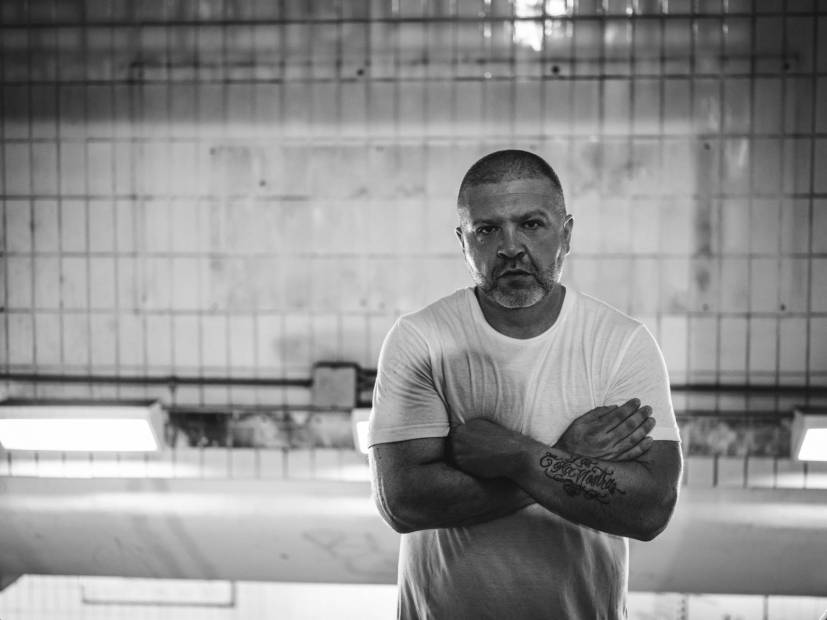 The saying goes “it’s darkest before the dawn” but for George Carroll, better known to most as Slaine, it is the darkness that yields his best work.

From the outside looking in, life appears to be good for the La Coka Nostra MC. He’s sober, continuing to get his shine on in the acting world and just released One Day (what he says is “unquestionably the best album of his career”).

But looks can be deceiving and one of the reasons this album came out so well is the result of serious tumult in his personal life.

“I don’t think anything else I’ve done touches this album. I think it’s like a buck-five above anything I’ve done. It’s the result of a lotta things. It took me so long to get back to a place of being able to do this with real fire and passion cause when I first got sober [making music] was difficult. I had to relearn how to do everything,” Slaine told HipHopDX in an exclusive conversation. “Even though I put out Slaine Is Dead, and the La Coka Record and the record with Termanology, those were all really slow processes. It was painful truly. It was like learning how to walk again. I was really focused on acting and this screenplay I’m writing with [screenwriter] Peter Conti. I studied acting for the first time. I took a year off music. I’m not gonna say I lost my passion but I was just thinking ‘maybe it’s not the sobriety, maybe it’s just time to move on to something different,” he added.

As it turns out, the “Bobby Be Good” rapper found his light in the presence of darkness.

“At the beginning of this year, I had a bunch of difficult situations I was going through in my personal life that continued through the whole year and actually I’m still going through it right now,” he exhaled. “So I started making music again. I needed to make this record. I needed it just to get through the days and I came to the realization during the process that I really owed myself amends. We do this process in recovery and I made amends to a lot of people that I hurt over the years but I never made an amends to myself and this album was part of that because I feel like I’m one of the most talented MCs – wordplay wise especially – in the world, and I feel like I sold myself short for a lot of years because I was drunk, fat, bloated, fucked up, writing verses in 20 minutes.

“On this album, I spent weeks on some of these verses. I took my time and crafted the production around it with The Arcitype. I would come in with verses that I wrote to my own rhythms and cadences and he would build the production around it. We slow cooked this thing. It was a real thorough process. I wanted to make every word count so I eliminated a lot of songs cause I wanted everything to sound perfect, I wanted everything to say something different. I feel like it’s the perfect length and I said what I had to say and I wanted to put forth a message of hope at the end of it which is why I put ‘Do What You Love’ as the last song. I felt like I was writing the last chapter of my whole career, and I wanted to use the record as hope for myself too.”

On any project born out of a therapeutic necessity, the artist runs the risk of hurting people they are close to. One song in particular almost did not make the cut for this very reason.

“‘The Day Before I Die’ I recorded very early on in my sobriety. That’s probably the most personal song on there. I had to run that song by my son’s mother before I put it on the album. I almost took it off the album. I didn’t know if it was appropriate to put out or if it was too personal,” Slaine noted. “There’s three or four records that I took off the record that were too personal and I didn’t wanna hurt other people. I don’t wanna hurt people that I love or people around me with my own personal battles exercising demons. That being said I feel like that was such an important song for a lot of people that have been with me through this whole journey,”

Coming from Boston, Slaine (like most people from the East Coast) drew heavy influence from Gang Starr. As we celebrate the legendary group’s latest release, which features posthumous verses from Guru, Slaine recounted how a few special moments with the group pushed him to keep going at a time when his life was particularly uncertain.

“Gang Starr was one of my favorite groups of all time still to this day,” he recalled. “I stood in line in Boston at Tower Records, I think it was ’99 when Moment Of Truth came out, and I got my album signed by Big Shug, Preemo and Guru. I waited outside in the rain for two hours and when I got to the front I shook all their hands and I told Preemo ‘I’m gonna work with you one day’ and I hoped to work with Guru too.

“I was working a mailroom job a few years later. I was at Emerson College in Boston and I had just done a song with Krumb Snatcha, who was working with those guys at the time. I pick up the phone in the mailroom and I hear this voice on the other end of the phone that I recognize and he’s like ‘Yo Slaine,’ and I was like ‘who’s this?’ cause I was at my job so why is someone calling them asking for Slaine [not his real name ‘George’]? It was Guru, and he was like ‘Krumb is playing me this demo you got over here. It’s crazy, it’s dope. Listen man, I think you got skills, you’re gonna go a long way. Keep pushing with it, don’t stop.’ Let me tell you that made my fucking year. I told him how big a fan I was, I told him how I stood in line and got the record signed.”

Although Mr. Gifted Unlimited Rhymes Universal passed before the two could ever connect on a record, his dream did partly come true.

“Unfortunately I never got to work with Guru, but I did work with Preemo a couple years later and I told him the story and what I’d said to him. He was like ‘well shit muthafucka what are you gonna do with it? That’s the question,’” said Slaine. “I’ve made a few joints with him. We did ‘Mind Your Business’ with La Coka, we did ‘Main Event’ with Special Teams and we did ‘Anti-Hero’ with me, Termanology, Bun B and Everlast.”

He continued: “I remember being so inspired by ‘The Planet.’ I moved to New York and I used to play that song all the time cause he talked about moving from Boston to New York and working in the mailroom and it was very inspiring to me chasing this dream and moving to New York.

“That’s what I was doing and that’s when I started rhyming and doing Bobitto’s open mics at the NUYOrican poetry cafe in 1996. That was the first time I ever got on stage. It’s been a long road since then. And as I think about all that, it just hits me that to know I made my best record at 43 years old is pretty crazy.”