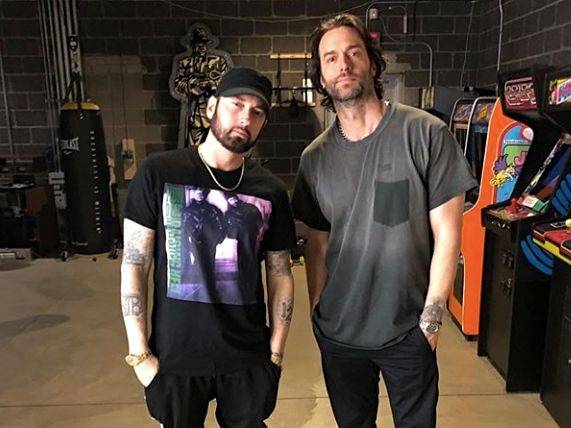 Comedian Chris D’Elia could’ve never predicted what would unfold after a video of his Eminem impression went viral. D’Elia released the clip in late January and by February 5, Slim Shady was tweeting about it.

From there, D’Elia was recruited for Logic’s “Homicide” video featuring Em and the rest is history. Nearly five months later, D’Elia is disclosing the details of what went down when he was invited to Shady’s Detroit studio.

“We hung out for two hours and it was fuckin’ unbelievable,” he explains during his “Congratulations” podcast. “My agents and their people were going back and forth. They were like, ‘Chris is going to be in Detroit. Does Em want to come to the show?’ And they were like, ‘Yeah, definitely.’ They were in New York, so they were like, ‘Why doesn’t Chris just come by the studio when we land?'”

He continues, “So we get there and we show up. Eminem is just sitting there. Eminem stands up and goes, ‘Flappin’ around like a …’ I’m like, ‘OK, this is the craziest fucking thing already.’ He’s doing my impression to me of him. He was like, ‘What’s up man?’ and we sat down, and I’m sitting on the same couch as Eminem and we’re tall talking and he was like, ‘Man, you killed that impression, man. It was so funny…’ It was so mind-blowing.”

D’Elia then went on to describe his initial impression of Em during the two hours they spent together.

“In the best way, he was just the most normal, cool guy,” he explains. “These fuckin’ icons, these legends — you meet them and sometimes they have this air where it’s like, ‘You’re lucky to be here.’ It didn’t feel that way at all. It was so cool and refreshing.

He then revealed who some of Em’s favorite rappers are.

“He mentioned 2Pac, Biggie, JAY-Z and all those guys,” he says. “I don’t even know what to say dude. I kept thinking about it the next day … It was so fucking weird, man. It was cool to meet him because I’ve listened to his music so fuckin’ much, man.”

Way too many napkins…

D’Elia says the most incredible moment came when Eminem began casually rapping in the middle of a sentence.

“There was one part where he was talking about somebody who was talking shit about him … ‘you don’t even know what I’m doing when I’m rapping, I’m using syllables …’ and he started rapping while he was in the middle of talking to us. It was unbelievable. It was insane. Imagine being on the same couch as Eminem and he starts doing that.”

Watch the full clip above and revisit the “Homicide” video below.