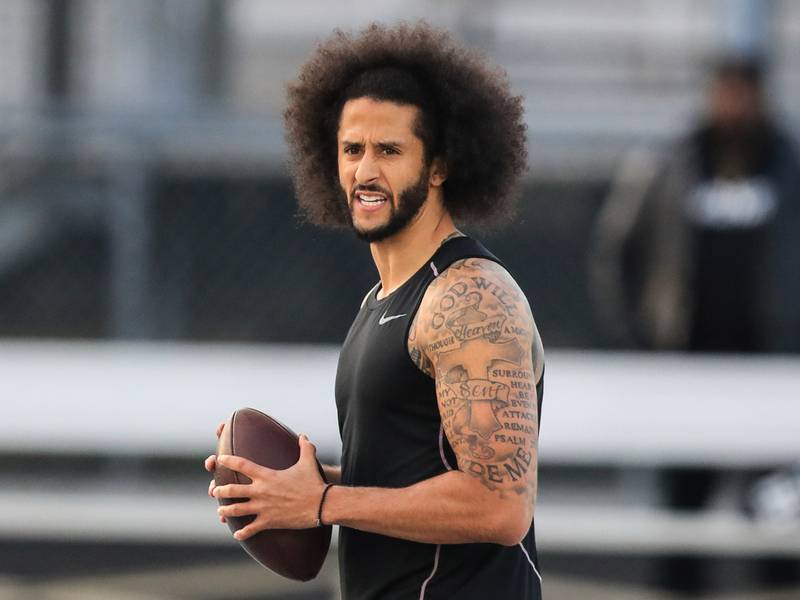 The official Twitter account of JAY-Z’s company mocked stories ran by multiple outlets — including TMZ and Sports Illustrated — citing sources who claimed Hov was “disappointed with Colin’s actions and believes he turned a legitimate workout into a publicity stunt.”

“A source at Roc Nation tells us JAY-Z (@S_C_) hasn’t spoken to any sources,” Roc Nation declared on Monday (November 18).

A source at Roc Nation tells us JAY-Z (@S_C_) hasn’t spoken to any sources.

JAY-Z reportedly had some influence in the NFL arranging a workout for Kaepernick at the Atlanta Falcons’ practice facility on Saturday (November 16). But prior to the showcase, disagreements between the league and Kap’s team led to the former San Francisco 49ers quarterback staging his own workout without the NFL’s involvement.

Kaepernick ended up displaying his skills at Charles R. Drew High School in Riverdale, an Atlanta suburb, and live-streaming the entire process. His attorney Ben Meiselas and agent Jeff Nalley released a statement on why the decision was made.

“Additionally, Mr. Kaepernick requested all media be allowed into the workout to observe and film it and for an independent film crew to be there to ensure transparency. The NFL denied this request. Based on the prior conduct by the NFL league office, Mr. Kaepernick simply asks for a transparent and open process which is why a new location has been selected for today. Mr. Kaepernick looks forward to seeing the representatives from the clubs today.”

Here’s the statement from #Kaepernick’s camp.

His reps say Kaepernick had requested media presence from the beginning to “ensure transparency.” pic.twitter.com/Eqbsyh3IZQ

Colin Kaepernick made a 90 second statement before leaving pic.twitter.com/QlH2RTnLp5

The NFL also released a statement on the situation, expressing disappointment but claiming Kaepernick was still free to sign with any team in the league.

“We are disappointed that Colin did not appear for his workout,” the league said in a statement. “He informed us of that decision at 2:30 pm today along with the public. Today’s session was designed to give Colin what he has consistently said he wants – an opportunity to show his football readiness and desire to return to the NFL.

“Twenty-five (25) clubs were present for the workout, and all 32 clubs, their head coaches, general managers, and other personnel executives would have received video footage of the interview and workout, shot by the Atlanta Falcons video crew.”

The NFL concluded, “Colin’s decision has no effect on his status in the League. He remains an unrestricted free agent eligible to sign with any club.”

NFL’s response to Colin Kaepernick opting to do his own workout today in Atlanta: pic.twitter.com/uvUZGH7CQ5

Let me be the first to advocate caution with Nike statements, but if we take them at their word there are a lot of NFL reporters with bad “OMG KAP wanted to shoot an ad!” takes they didn’t bother to check out.