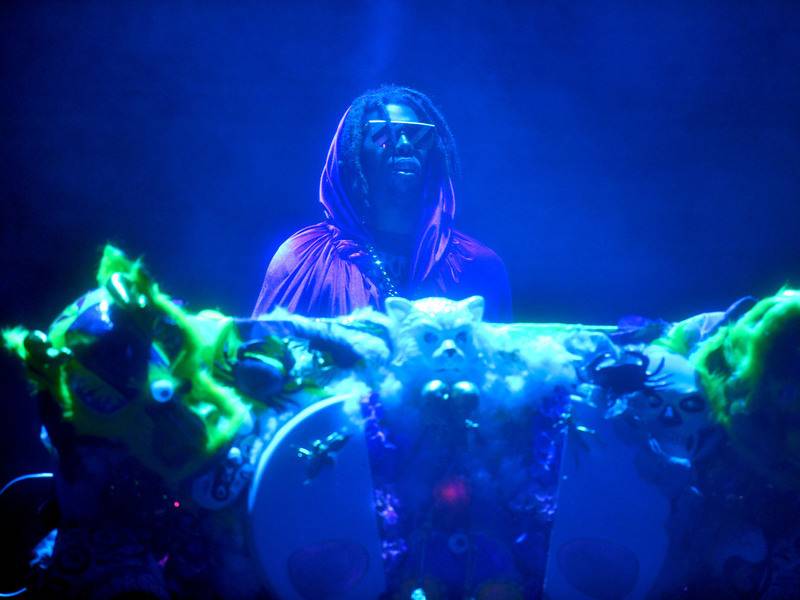 Los Angeles, CA – DOOM impostors aren’t a new phenomenon, but they’re usually not portrayed by someone who’s arguably more famous than the man himself.

That’s what happened though when comedian Hannibal Buress donned the mask to portray the enigmatic rapper during Flying Lotus a.k.a. Captain Murphy’s set at the 2019 Adult Swim Festival on Friday (November 15).

Lotus teased the crowd by claiming he brought DOOM “all the way from London” to the event in Los Angeles. Madvillain’s “Accordion” began to play and Buress — wearing DOOM’s signature mask — emerged on stage to lip-sync the performance.

The ruse didn’t last long as Lotus unmasked his friend to reveal the truth. The acclaimed producer then asked, “Hannibal, what are you doing here?”

Buress replied, “I wanted to help out. DOOM doesn’t do shows like that, man.”

Actually no it was fucking @hannibalburess 😔 when I tell y’all I was sick 🥺 pic.twitter.com/MbTgcyD2kF

.@hannibalburess pretending to be DOOM during @flyinglotus’ set lol pic.twitter.com/999r2gUDzD

DOOM has longstanding ties to Adult Swim, but the relationship between the two sides went sour in 2017.

The veteran MC and network teamed up that year for a series titled The Missing Notebook Rhymes, which was supposed to result in the release of 15 new DOOM tracks. But only seven weeks into the rollout, Adult Swim abruptly cut it short and removed all the songs from its site.

“Adult Swim is ending our relationship with DOOM, and thus, the remaining Missing Notebook Rhymes will unfortunately have to remain…missing,” the network said in a statement. “We are glad to have had the chance to provide the previous free tracks to our fans.”

Watch Buress play the role of DOOM above and check out past footage of an impostor portraying the masked rapper below.