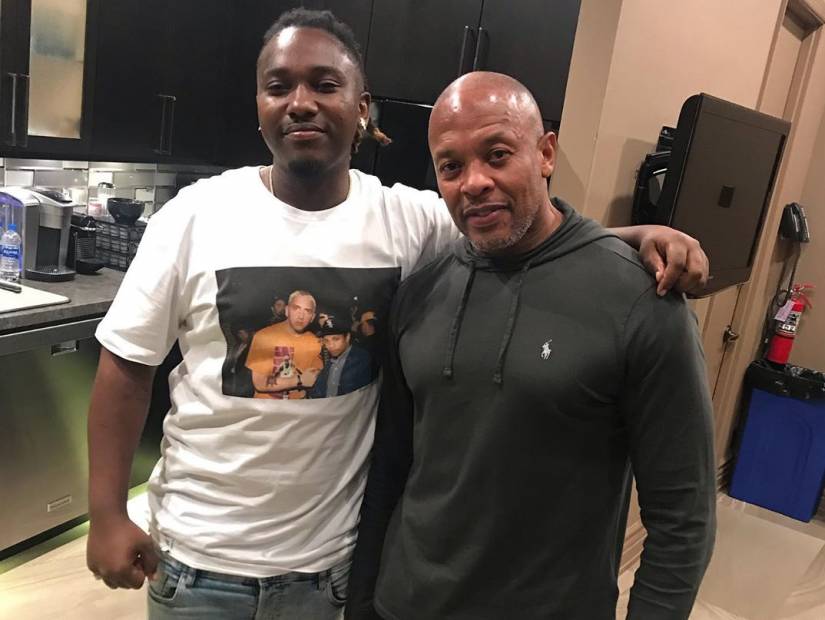 Osbe Chill Got His Dr. Dre Co-Sign Working On The Game's "Born To Rap"

Los Angeles, CA – While news of Dr. Dre in the studio often elicits snickers and skepticism among diehard Hip Hop fans, that doesn’t mean The Good Doctor isn’t getting his hands dirty with each and every studio session.

Just ask Osbe Chill, the longtime affiliate of The Game who was recently spotted in the studio exciting The Chronic creator’s eardrums.

“The video with Dre was I’d say probably a month ago or something,” the Los Angeles rapper told HipHopDX. “We was working on the Born To Rap album that day.”

When legends like @drdre fuck with your music not only is that a divine confirmation, its inspiring as fuck. @losangelesconfidential once again is the realest I know for providing this opportunity for me. Who would of thought this young nigga from #THEJUNGLES would be around so many legends #DAWGMA🐾 is a classic and has been #STAMPED Put some respect on my name #pricejustwentup #NEXTUP 🐾🐾 🔴 #PROLIFICRECORDS 🔵 🤟🏿 📸 @chasingthestoke

Born To Rap is Game’s long-announced and supposed swan song of an album. And the song they were working on appears to be special for a number of reasons.

“They were working on the song that Nipsey Hussle is on,” Osbe added. “They were actually working on that, on the production and all of that on that particular song.”

After the work was done, an opportunity to impress the living legend arose and Osbe didn’t squander the moment.

“It was a couple people in there playing music, and he basically asked if anybody else wanted to play something,” he said. “I plugged up, and he ended up liking it a lot. I feel like I made it in that moment. That was one of my dreams just to be able to at least even be in the same room with Dre. The fact that he was actually feeling my music, that shit was epic for me.”

The song Osbe played was “Don’t Need You” from his latest album Dawgma. As an additional bonus, the day just happened to be his birthday and Dre wasn’t the only rap great he got face time with.

“I was sitting there smoking with Snoop Dogg and shit like that and just going over the music,” he continued. “And Dre was cool. We was sitting there just chilling in-between times of working. He likes to take breaks and chill and chop it up. I got to actually sit down and talk to him.”

No release date for The Game’s Born To Rap has been released thus far.