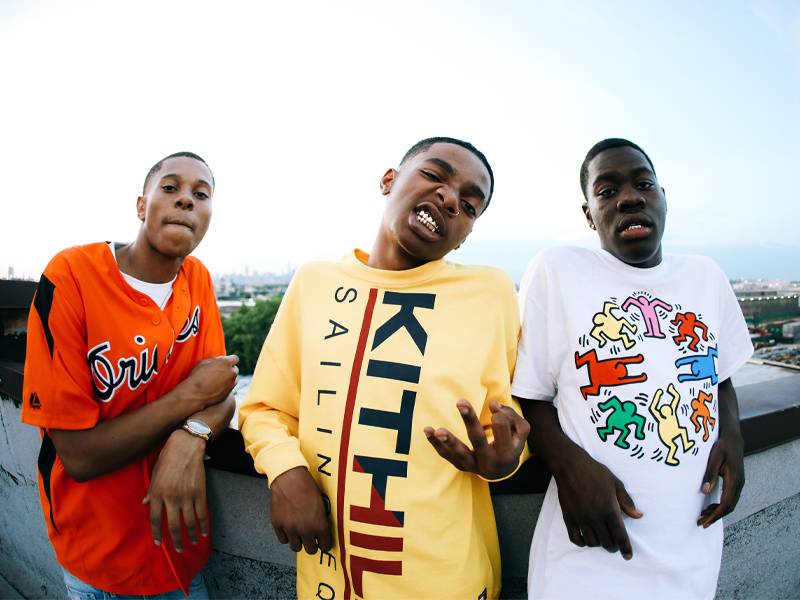 Baltimore, MD – Whenever a group manages to make a few songs that capture the attention of older listeners by rekindling that good old 90s feel, they get put into a box — with the quickness. For some, it’s a role that forces them outside of their comfort zone. However, emulating a sound sometimes translates poorly to larger bodies of work.

It can also result in colossal fan base dips when it becomes clear that the magic was a one-off.

That’s likely not going to be the case for Jayy Grams, Von Wilda and Hayelo — who make up the buzzing Cinematic Music Group-backed group LOWFi. Having all been raised on a healthy dose of Hip Hop by younger parents, their youthful energy and evident penchant for bars have made them a hot commodity on the indie scene.

Nothing was overnight with the trio. As they break down to HipHopDX, it was their unwavering belief in themselves that put them on the map. In the most Hip Hop of fashions, the scales tipped with a freestyle.

“I made a poll on Instagram one day and was like ‘Y’all think I could make XXL Freshman cover,'” Jayy says. “I thought I’d get messages like ‘Keep striving’ and things like that. Instead, it was like ‘Fuck that, you’re delusional … you crazy man.'”

It was that response that lit a metaphorical fire under the Baltimore MC, inspiring the freestyle that changed everything for the LOWFi team.

“I made a freestyle (and video) to counteract everything that everybody was saying and I sent it to Jonny Shipes [of Cinematic Music Group],” he says. Though he’d sent stuff to Shipes in the past, he decided to try again — and the rest (as they say) is history. A month later the boys were flown in and the details were mapped out.

Jayy has since established himself as the unofficial leader of the group, having already two projects on the Cinematic imprint, Grime & Basslinez and Good Times. Still, pushing the overarching movement remains at the forefront for everyone (including Jayy) for the time being.

To date, the group has dropped two collective commercial releases: 2018’s debut The Allegory and — most recently — the three-song EP The Difference.

“I feel like the people that discovered us during that time became devoted … it was like [that project] had a little coke on it,” he adds with a laugh.

Von echoes the sentiment, adding the collective surprise the group experienced after seeing the reactions from (new) fans.

“I didn’t understand,” he says humbly, “so many people were saying this is one of the best five for the year. ‘This is my favorite project of all time.’ It was crazy too, cause [The Allegory] dropped a little early.”

If you not watching the Memory lane video in our bio then wyd??? Not a damn thing so go run that up!! #lowfithemovement

Von explains that the group had moved on to their next project during the lead up to the seminal project’s release.

“We had music that was just way better than what we were dropping on that tape,” he states. “It was a blessing that everyone gravitated towards that. You know, it gave us something to look forward to in the future, actually,” Hayelo quickly interrupts.

Allusions can be made to Cinematic’s centerpiece, Joey Badass — and his Pro Era movement. LOWFi acknowledges that they (also) remind some listeners of the grimy sounds of East Coast yesteryear while adding that it’s in no way a forced aura.

“It’s not something that we tried to do with it … it sounds that way naturally,” Hayelo explains, “we’re just versatile in general. We’re still young, though. Yeah, we give them that feeling, but we still appeal to people that’s our age and younger.”

They continue to bridge the gap on The Difference, a project that they admit was partially meant to hold off fans until their official sophomore LP Legion was complete.

“That got a good reception,” Jayy states to Von’s agreement. “People are buying shirts and everything … I think everybody ready for Legion.”

Von adds, “We try not to say too much about it … we didn’t want to specify the date. [The Difference] was almost keeping the label distracted while we work for ’em,” he explains, specifying that it would indeed drop in October.

In talking with the group, it becomes clear that there is a bigger vision. Cinematic is a boutique label, but the roster is built up of artists that could more accurately be described as movements (in their own rights). Indie heavyweights who have mastered the obstacle of fanatical fanbase creation without pandering to a more restrictive commercial box.

CMG, in that respects, couldn’t possibly be a better home for them.

“The ultimate goal for LOWFi is to make it a way of life … make people get up and start doing shit. That’d be dope. I don’t wanna make it sound weird, but I want to be like a cult,” Jayy says, citing notorious cult leader Jim Jones as a (loose) example.

“You wild,” Von quickly blurts out, causing Jayy to laugh. “I ain’t giving nobody the Koolaid.

“Obviously in a good sense,” Jayy says, defending his point. “Like, but where people actually get invested in a positive way. I just want to make people be more vigilant and aware of what’s going around going on around them. I feel like a lot of people come out and make music that has that mentality; but as time goes on, you notice they stray away from it.”

He elaborates, “People get caught up and can’t keep that vision going … [for us] the mold was set in stone in the beginning. We are never going to be in that position. No worries about that.”