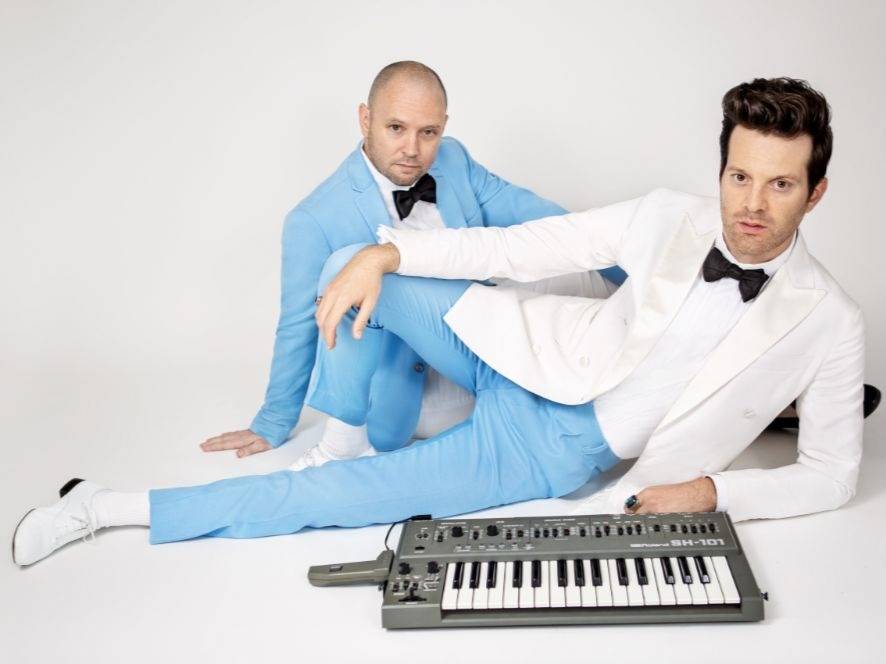 In their new “Toast 2 Us” video — taken from their latest album Tuxedo III — the unlikely duo recreate several iconic album covers, including Public Enemy’s It Takes A Nation Of Millions…To Hold Us Back and Outkast’s Stankonia, a tribute to some of their heroes.

As he touched on in Part 1 of the Tuxedo interview, Mayer got his start in the industry thanks in part to his relationship with Peanut Butter Wolf and Stones Throw Records.

Jake, on the hand, has produced countless records for a roster of Hip Hop notables — from De La Soul’s The Grind Date and Brother Ali’s Mourning In America Dreaming In Color to G-Unit and Rick Ross’ Port Of Miami 2.

In Part 2 of the Tuxedo interview, Jake and Mayer discuss Tommy Boy Records recent feud with De La, the only time they’re nervous performing for a crowd and the quickest way to get under a rapper’s skin.

HipHopDX: Jake, I know you worked on one of De La Soul’s albums. The Grind Date, right?

Jake One: Yeah, it’s funny. That album was actually on Sanctuary, which was Beyoncé’s dad’s label. And I think that’s the only reason why that one’s on streaming services because of the license issues.

HipHopDX: Have you been paying attention to this Tommy Boy stuff?

Jake One: Yeah, it’s bad. It really sucks because they are as important as any rap group ever. And there’s just generations of kids that aren’t really understanding that because they can’t just pull it up on their Spotify and get educated on these things or bump it on the YouTube and stuff like that. It’s definitely slowing down their momentum and their legacy, which is not fair because they really invented a lot of that shit.

It’s still going to this day. Unfortunately, whatever deals they did way back then and just the way records are made, when have 13 samples and one song … I get the logistical part, like it’s kind of impossible to clear all that stuff, to get it done legally, but there’s gotta be some way they can make it work. If not, then it’s clearly Tommy Boy. They’ve never been paid a dime from Tommy Boy royalties. Unfortunately, this is often how the music business is run.

HipHopDX: You’ve been at this for awhile, but do you ever feel nervous doing live shows?

Mayer Hawthorne: At this point, when you get to play for your fans and your crowd, it feels great. You’re not really nervous. I get more nervous when it’s an unknown kind of situation. Like if you got to win them over. That’s a whole different thing.

Jake One: I’ve done so many shows at this point that the only place that I ever get nervous to perform is in Detroit.

Jake One: Home is just where you really want to kill it — and it’s the dumbest thing. It’s so backwards because those are the people that are the most forgiving,  your family. They’re the ones that are not judging you at all. But those are the people that I want to impress, you know? I want the respect of my peers in Detroit. That’s just what’s important to me. For sure.

HipHopDX: I can relate. I still want my parents to be proud of me. If your videos are any indication, your live shows are dope.

Mayer Hawthorne: They’ve been going good. We work really, really hard at it. Way harder than most people think.

Jake One: I think the expectation for a live show is so low at this point, if you go out and have things that are coordinated and things that are above and beyond, everybody’s blown away.

HipHopDX: Have you guys seen a Tech N9ne show?

Jake One: I have not.

HipHopDX: I went to Rock The Bells one year at Red Rocks and Tech N9ne came out. He had the face paint, costumes and choreographed dance moves and the crowd just went crazy. As an audience, we appreciate that.

Jake One: Yeah, right, for sure.

Mayer Hawthorne: We want to make sure that nobody ever wants their money back when they come to see our show. It’s worked for us so far because every time we return to a city, there’s more people than there were the last time.

HipHopDX: I can see that about you guys. You do have a certain charisma together and I think that translates well live. It’s clear on this phone call actually.

Mayer Hawthorne: That’s what we do the whole tour.

HipHopDX: You guys remind of when I interviewed Evidence and the Alchemist as Step Brothers.

Jake One: Nah man, those guys are actual comedians like they could really …

Mayer Hawthorne: Al is by far the funniest person I know. Al is an absolutely hilarious human.

HipHopDX: There were a couple moments where I had to really think, “Wait, are you guys fucking with me or is this actually true?”

Summer is here and @Tuxedo is back with a brand new track! I’ll toast to that! 🥂 Available on all platforms! #fuxwiththetux

HipHopDX: You guys have a similar chemistry it feels like. Even both of you on your own, congratulations on your success.

Mayer Hawthorne: Thank you very much. We appreciate it.

HipHopDX: I think you were just in Denver, weren’t you?

Mayer Hawthorne: You’re going to probably have to travel to see us because I don’t think we’re coming to Omaha anytime soon.

HipHopDX: Yeah, I had to get out of there. For me, it’s way too centered on alcohol. I don’t drink anymore. I tried the whole alcoholic thing, it just didn’t work out for me [laughs].

Jake One: I can’t wait to tell Neal [Duffy, Omaha native/Tuxedo tour manager] that you moved out of Omaha. You’re like, “Yeah, peace, Omaha.”

HipHopDX: Peace. Love you. Yeah, but I’m out [laughs].

Fresh for the freakin’ weekend! “808s & Rollerskates” a new DJ mix from @tuxedo 🚨 LINK IN STORY shout out to @jakeuno for modeling his legs for the cover art

Jake One: Yeah. Neal said to make sure you ask them about Omaha and you left [laughs].

HipHopDX: I left twice actually. But honestly Jake, I swear we’ve met before. I can’t remember. It’s just been too many years of Hip Hop.

Mayer Hawthorne: One of my past times at this studio is to make fun of rappers’ weed and I don’t even know what it is but just insinuating their weed is trash is the most offensive thing. It’s the most offensive thing you can say to a rapper and I just love doing it. I don’t know. It’s like one of my favorite things to do now because it burns them up.