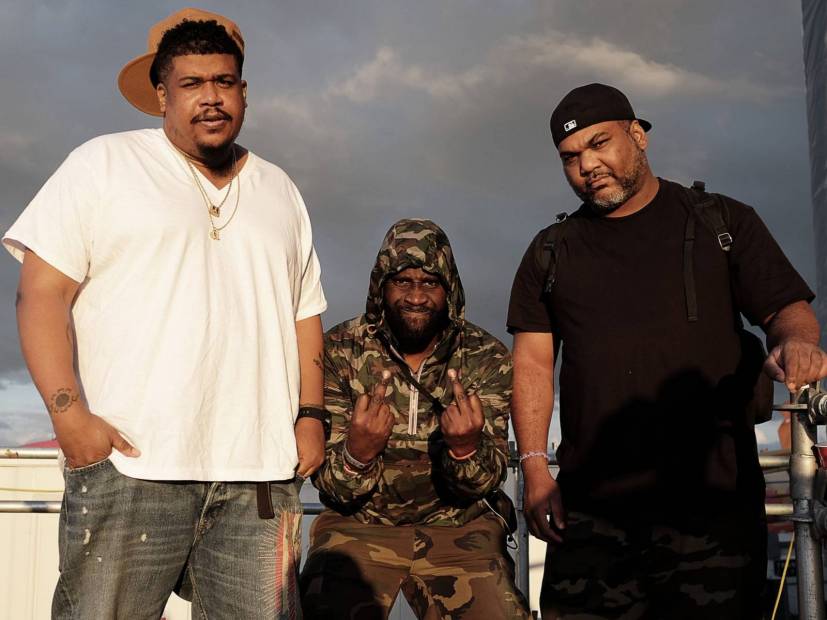 By now, it’s well documented De La Soul and Tommy Boy Records’ founder Tom Silverman aren’t seeing eye-to-eye. The legendary New York Hip Hop trio has been in a battle to take control of their first six albums for what feels like an eternity.

Last week, Posdnuos, Dave and Maseo revealed negotiations had stalled, and there was no resolution. According to one of De La’s Instagram posts, Silverman flatly stated he’s “not in the business of giving artists back their masters.”

Well friends, after 30 years of profiting from our music and hard work… and after 7 long months of stalled negotiations, we are sad to say that we’ve been unable to reach an agreement and earn Tommy Boy’s respect for our music/legacy. With some helpful consulting and long careful consideration, we’ve decided we will not do our 30+ years the disservice of settling on Tom Silverman’s terms. Tommy Boy says they are “not in the business of giving artists back their Masters.” We realize, there is a process in reclaiming ownership but we do not trust Tommy Boy in this process after so many years of disappointment. Therefore, our catalog will not see the light of day by way of our involvement or consent. This means, if you see De La Soul music/albums available for streaming or purchase anywhere, BE AWARE, all parties involved WILL profit but De La Soul WILL NOT benefit or earn deservedly/fairly. We really tried. More details to come. Nevertheless, our fans have/will keep our legacy alive! We appreciate and ask for your continued support. Onto new things, new music and more amazing respectful business relationships. #dontpressplay #respectourlegacy #respecttheculture #tommyboycottcontinues #4080

But in a recent interview with HipHopDX, Maseo explained that while he understands that’s often part of the business, he noted they were so young when they got into it that it was easy for the powers that be to persuade them into signing something that might not have been in their best interest.

“I was young,” he tells DX. “First of all, the way it was presented to me at the time, you know, it was presented in a manipulating manner when I think back. You’ve got your lawyers, and your business manager … when you’ve got all these people and here it is, they already have ongoing relationships with one another prior to it, you kind of get coerced to do something that appears to be customary.

“I actually spoke about this with Dave the other day. I was like, ‘Dave, man we were coerced to do those certain things.’ I was like, ‘After going through the trials and tribulations and gaining knowledge of this whole thing, people give you a perception like things are just customary.’ When publishing advances were offered, it was like this is what’s customary to take because they definitely wanted the publishing, you know?”

Maseo does say they received writer’s credit but that well eventually ran dry.

“At the end of the day, we did get publishing advances and we got writer’s credit,” he explains. “Writer’s credit means we’ll get paid for the songs we played, but we have no ownership. Records do stop playing, so when they stop playing, you stop getting paid. But overall, the catalog still holds some value.”

Although Tommy Boy didn’t literally say, “fuck you guys,” it was essentially implied, at least that’s how Maseo perceived it. He’s also baffled by the fact Tommy Boy attempted to release their first six albums on all streaming platforms on the 30th anniversary of 1989’s seminal De La Soul album, 3 Feet Hight and Rising.

“In much nicer words he said, ‘I’m not in the business of giving artists back their masters. Period,'” he says. “You know, at the end of the day, it’s like come on, man. I deserve my masters based on the value that I give to sustain myself and my group.

“There must have been a reason to celebrate all of this on our anniversary. You could have actually released an entire Tommy Boy catalog that you got back and waited for your anniversary. Why are you not trying to do this on his anniversary?”

Thank you friends and fans. Your kind positive words mean a lot and your support goes even farther. As frustrating as it is and as crazy as it may sound, your act of NOT purchasing or streaming anything musically De La Soul, falling under the Tommy Boy banner (until further notice) helps us immensely and can possibly aid others experiencing these similar woes. Thank you @nas …thanks Pete @bittenbender and @massappeal for your committed support and promising business relationship. We’re in the stew working on new music and will continue to celebrate this wonderful journey we’ve been blessed to experience. Thank you @djpremier and @realpeterock for your diligence and support. 30 years is a helluva milestone. We’re so proud to be able to share our celebration with you all. Look out for our 30 year commemorative release coming very soon #delacoinz Your support will directly fund future endeavors and projects…. Just to put the final nail in the coffin. We wish Tommy Boy no ills but we do call for a boycott of anything bearing the name. Karma will do the rest… that old enslaved record label contract dinosaur is long dead and gone, but unfortunately still stinks. For those who may not have had a similar experience with Tommy Boy, be thankful, be wise and stay alert… the devil does not rest and is never satisfied. Peace. Plug 1,2 and 3 Seek and check out these De La Soul releases: Impossible Mission mixtape #grinddate De La Soul: Are You In? Nike + Original run #smelltheda.i.s.y. #andtheanonymousnobody Tom Misch feat. De La Soul “It Runs Through Me” @djshadow feat. De La Soul “Rocket Fuel”

This isn’t the first time Tommy Boy has been at the center of controversy. Naughty By Nature’s Treach once unleashed a small army of vermin and reptiles into their former New York City offices, which Maseo says is the reason most major labels have security.

“Anybody who gets into this kind of situation, you’re definitely angry, you’re in a rage,” he admits. “You really want to hurt somebody. You go through these emotions that … in Hip Hop, most rappers will act out. You know what I’m saying? But I’m gonna wait.

“Once upon a time, Treach did go up to the offices and let out a bunch of rats and snakes. This was the mid-90s when Tommy Boy was still on 86th Street. Treach went in the office and let out rats and snakes all throughout the office. They had to shut down. That’s what also led to them moving downtown. That is also the reason why most record companies have security up there.”

Maseo says there was a period when Silverman welcomed the drama.

“Tom, once upon a time, even used to like artists hitting the label,” he recalls. “He’d always think the good and bad helped sell records, really the artists talking shit about the label, that’s good for record sales. He would say stuff like that. Now it’s kind of taboo because you’re looking like you may not be able to do normal business in the future.

“But let’s be clear, they fell off. They’re trying to make a comeback. They’re too busy trying to say we’re not relevant when they’re not relevant. We’ve had continued success without Tommy Boy. Let’s close the coffin on this so we can really get back to work.”

De La is currently cooking up two new full-length albums, including a third installment of the Art Official Intelligence series. DJ Premier and Pete Rock are providing beats for the projects. They will serve as the follow-ups to De La’s 2016 Grammy Award-nominated album, And The Anonymous Nobody.