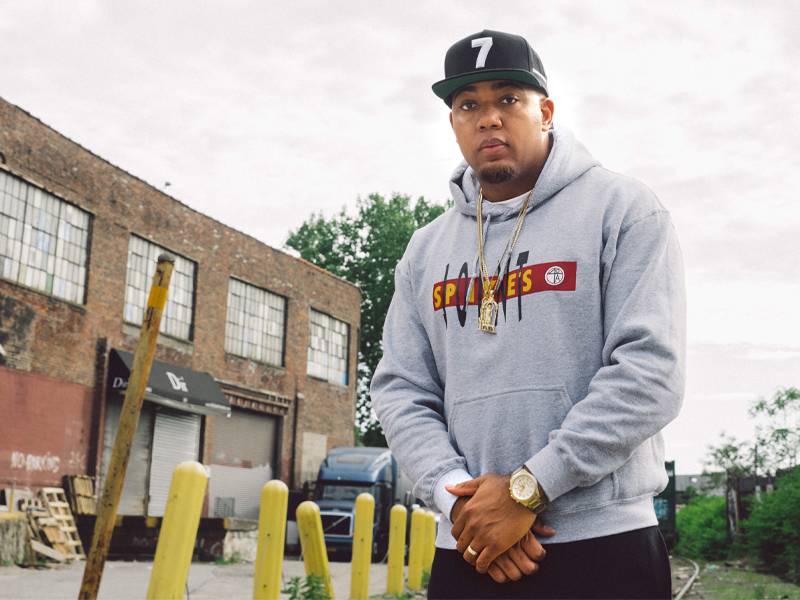 brooklyn, ny – Brooklyn MC Skyzoo is preparing to drop his long-awaited collaborative LP with Pete Rock on Friday (September 20). Drenched in the lyrical complexity he’s known for delivering, Retropolitan explores themes of identity and gentrification as it applies to his hometown of New York City.

In part two of his conversation with HipHopDX, Sky talks about Pete Rock’s sole verse on the album (“Truck Jewel”), getting antagonized by NYPD after Chinx’s funeral and why he thinks the New York sound got lost in the shuffle.

Happy bday shout x mega salute to the OG, my bro, LEGENDARY status, Pete Rock. Live it up my G. “Retropolitan” on the way Asap… @realpeterock 🤜🏽🤛🏾

A large part of Retropolitan‘s charm is the apparent synergy between the two. Upon beginning the process, Sky says that he knew he wanted to get Pete to rhyme on at least one song on the LP.

“I said, ‘Yo P, you know you got to get on the album with a verse,'” Skyzoo says with a laugh. “I was drawn to ‘Truck Jewels’ because of the beat.

As he explains, the instrumental for “Truck Jewels” captured that aura perfectly.

“That beat sounds like that. It sounds like, Cotton Comes to Harlem … It sounds like a scene from Shaft where Richard Roundtree is running around and shit,” he says with a laugh. “It was a done deal … we knocked it out.”

The first taste of the project fans got their hands on was “It’s All Good,” a 25-year-old gem that Pete produced during the sessions for Nas’ “The World Is Yours.” One of the most poignant elements of the song was a story Sky told in the second verse about being harassed by police as he attempted to leave the funeral of fellow rapper Chinx.

“I was at Chinx’s funeral — he was a good friend of mine,” he says. “I left the funeral and had parked like two blocks away from the church. I got in my car and pulled off … I’m not doing anything. I don’t have anything to hide. I may have driven two feet before I got surrounded by cop cars.”

The incident took place on 174th Street in South Jamaica — the same block Sky says he lived on when his father moved to Queens when he was in high school.

“They’re whipping open my door, yanking me out,” he says, adding that he overhead them whispering while they aggressively searched his vehicle.

It was that whispering that inspired the repeating bar at the end of the song:

Yo, you ever been surrounded by police, and overhear them whispering to plan where to throw a ki?

“That whole story really happened. But, that wasn’t the first time that it had happened to me. Do you know what I mean? It’s just like another day in the park,” he says, noting it’s been a reasonably recurring theme in his catalog. “I made a whole song about it [on the last album] ‘Black Sambo’… that whole record is about police brutality.”

Sky then recalled another incident from his youth when the police harassed him and his friends.

“I remember being 12 and seeing the look in the detective’s eyes … he was getting excited at the idea of being able to fill his quota. These things happen, and they shouldn’t. That was normal, you know … that was normal for [the officer].

“So those are the things I’m talking about on the project.”

Another theme vastly explored on the LP is the degradation of the culture that cultivated him. Though has insisted he is talking purely from the standpoint of the city of New York itself, it’s relatively easy to see how his brand of Hip Hop subtly illustrates that music has experienced the same phenomena.

With the rise of Griselda and its extended family tree, it seems as though a once commercially defunct brand of Hip Hop is now making a comeback.

“They’re doing a fabulous job making sure everything’s right,” he says of Griselda. “Those guys are like family to me … Westside Gunn, Conway, Benny and everybody around them. Those are my guys.”

The core trio appears alongside Elzhi on the second single from the album, “Eastern Conference All-Star.” The track feels like defiant standing of the guard — a flag-planting for a new era of Hip Hop.

“The sound is coming back … and really, it’s about the identity. I think people get lost in the idea that ‘Oh, it’s not a soul sample, so it’s not New York.’ That doesn’t have to be what it is,” he explains. “It’s just gotta be our identity.”

As the Mecca’s sound once ruled supreme, it began to diversify as other regions started to rise to prominence.

“You also still have a million New Yorkers who sound like other regions,” he says, making it clear that he isn’t at all disparaging any of the various movements. “My argument is you never saw other regions trying to sound like New York when we were hot. Those guys didn’t try to sound like us. They sounded like them … they knew that their shine was coming.”

As Skyzoo further breaks down, the loss of the city’s musical identity is a chief byproduct of its strongest character trait.

The official album release concert for #Retropolitan, Monday Sept 23rd at @theboweryelectric in NYC. I’ll be performing the entire album 👀. Tix available now at www.theboweryelectric.com. Pull up for the city🗽

“New York has always been the home of the hustle,” he says. That the train of thought — he explains —permeates into everything, including music. “Young kids in New York is like, ‘Oh this is what’s hot. We doing that.’ That’s what happened — and that’s the issue.”

All this, of course, speaks to the central punchline he’s made quite prominent throughout the project’s roll-out: Retropolitan is more than a lush love letter to the city he calls home, “It’s a wake-up call.”