JAY-Z Gets Blasted On Twitter For Meghan Trainor NFL Inclusion 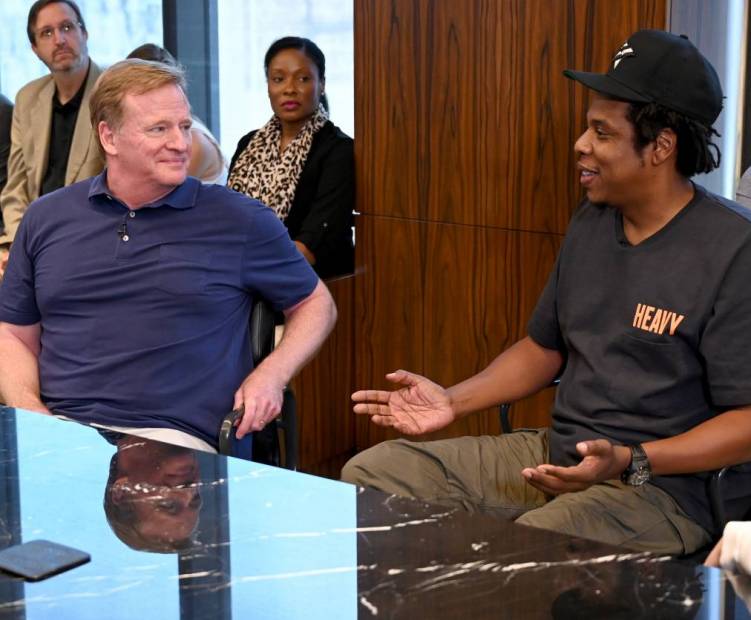 New York, NY – And just like that, with JAY-Z and Roc Nation’s announcement of the first event in connection with their partnership with the NFL, Twitter is up in arms about it.

On Thursday (August 29), the NFL and Roc Nation announced the Inspire Change Apparel and Songs of The Season initiatives through their Inspire Change social justice platform.

The announcement also revealed the Inspire Change Advocates, Meek Mill, Meghan Trainor and Rapsody, will perform at a free concert during the NFL Kickoff Experience presented by EA Sports Madden NFL 20 on September 5 in Chicago at Grant Park.

Backlash exploded on Twitter as it appears many are upset Meghan Trainor will be representing Roc Nation and the NFL as an Inspire Change advocate.

Opinions on the online platform ranged in tone from accusatory claims the rap billionaire had sold out his community, to general remorse and or disdain for Trainor, widely known for her host role on the TV show The Four.

Jay-Z is the most successful man in the history of hip hop. His wife is the biggest star in the world. So he joins up with the biggest sports league in America to “fight for social justice” and what do we get?

And there it is….Jay Z at work:
NFL to Launch Inspire Change Apparel and Songs of the Season Through Its Social Justice Platform Inspire Change

It was only a matter of time the NFL would decide to monetize social justice through T-shirts and Meghan Trainor songs. White people did it with the blues, they did it with Jazz, they did it with rap, and now they’re doing it with outrage over black males murdered by the police.

One user theorized the move was part of a larger agenda for the NFL.

I get why the NFL wants Meghan Trainor as a part of their “social justice” OPTICS:

She dislodges the “Social Justice” initiative from being a ”Black thing,” and makes it seem like the NFL cares about women. pic.twitter.com/KnQwGMJ24T

Some even joked about the matter, with one user remarking, “JAY-Z finally turned heel on black folks.”

Another user found comical light in the situation in a series of tweets that undermine Trainor, Colin Kaepernick and more.

Police: *killing yet another unarmed Black man on camera and getting away with it.*

Me watching at home: "WHERE IS MEGHAN TRAINOR? SOMEONE PLEASE FIND MEGHAN SO I CAN MAKE SENSE OF ALL OF THIS!" pic.twitter.com/vBD4NVC6Ak

Like I been asking. What can a Jay+NFL partnership achieve that neither party couldnt achieve on its own? You combine a $15B corp& Jay's influence and a Meghan Trainor concert is what comes out of it? It's all a PR move to remedy how uncomfortable the Kap discussion made NFL fans

The fact that Jay Z really said we're past kneeling and is promoting shirts for Meghan Trainor… pic.twitter.com/e2OX9AuvC5

Colin Kaepernick walked so Jay Z could fly into an NFL agreement whereby we stop kneeling and instead listen to Meghan Trainor because this is chess and not checkers.

Jay-Z said to get up off your knees so you can dance to Meghan Trainor in the name of social justice.

“I have almost reached the regrettable conclusion that the Negro's great stumbling block in the stride toward freedom is not the White Citizen's Council-er or the Ku Klux Klanner, but the white moderate who is more devoted to "order" than to justice….” -Meghan Trainor https://t.co/GI63ZQhiVl

meghan trainor aka the bitch who made a song about how she wants to serve her husband and looks fresh out of the 1950s is gonna teach us about change and ending racism? pic.twitter.com/GtpcYXMOkD

HOV has already received a significant amount of commentary about his deal with the NFL by way of support and backlash from prominent figures in Hip Hop like Killer Mike and Irv Gotti.

Watch the video about JAY-Z, Colin Kapernick and the NFL below for even more insight on the matter.