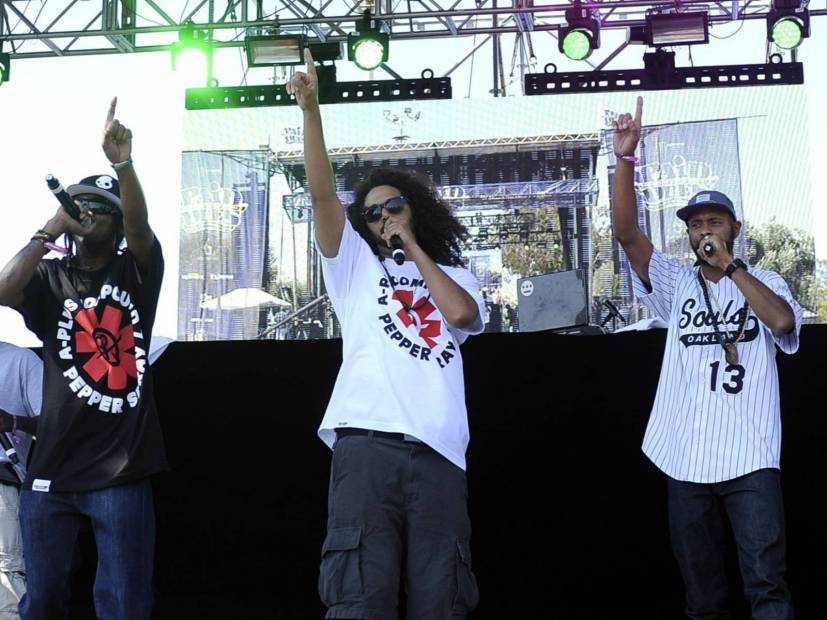 Oakland, CA – The Hieroglyphics crew is preparing to embark on the second leg of their 30th anniversary tour next week, but that’s just the tip of the proverbial iceberg.

🗣 The wait is over! The 8th Annual Hiero Day line up is here! Early bird pricing ends on August 11th – Get your tickets now before prices go up! Who are you excited to see?! Use the hashtag #everydayishieroday

Hiero’s first crew album, 3rd Eye Vision, was released in 1998 and each member has gone on to establish themselves as formidable solo artists. At the same time, they’ve kept the Hiero name alive not only with Heiro Day but also their extensive merch line, Hieroglyphics Imperium Recordings imprint, various side projects and tireless tour schedule.

Most groups don’t attain the kind of longevity needed to see a momentous event like Hiero Day come to fruition. They often fall apart due to internal conflict — but Hiero is different.

While standing outside of Denver’s Cervantes Masterpiece Ballroom in June, Tajai spoke to HipHopDX about a plethora of topics and revealed what he believes makes them so solid.

“We go through stuff, but all friends go through stuff. We’re each other’s kids’ godparents. You know, we grew up together — literally. I’ve had these friends since, at the earliest, 1980.”

All of Hiero’s earliest albums were recorded in the Tenderloin district of San Francisco, a rugged area of the city overrun with homeless camps and rampant drug use — and it’s only getting worse.

“Wash your shoes after you get out of there,” he said. “There’s human shit everywhere. We recorded all of our first albums over on Hyde Street over there. There was a guy dead in front of our studio for probably half a day. When the police finally came to move him, they were like, ‘Oh, he’s gone, get the meat wagon.’

“Now, all of Oakland and San Francisco looks like Skid Row. It’s really weird because you’re parking Teslas and fucking Lambos next to homeless people. I ride such a line between like, ‘I want to help you’ and then like, ‘What can I do aside from buy you food?’ I’m thinking about some sort of easy solutions, but it’s not just about the [living] space, it’s about mental health. I think we’re getting so used to walking by. Like people treat them like pigeons or fucking seagulls or something. It’s rough because it’s making us all worse people.”

But at least for Hiero, the music never stops flowing and can offer beauty in a world where it sometimes feels like there’s none. Although it’s been six years since Hiero dropped The Kitchen, there’s always talk about doing another crew project, but the timing has to be right.

“We’re prolific solo artists, so a lot of times those Hiero songs get snatched for individual albums,” Tajai explained. “I think it’s important that we sort of go in with the intention of making stuff for a particular Hiero record. It’s a weird time right now. It’s like, we’d rather go off vibes and really make the best product than try to beat this sort of production cycle that it seems like a lot of rappers are on.

“I mean I think you know, Rap Noir [Tajai’s side project] has a new album. Stoney Hawk has a new album. Opio’s got some new stuff coming. Pep Love just dropped a bunch of singles, you know? So it’s not like we’re not busy.”

The Hiero tour kicks off next Tuesday (August 13) in St. Paul, Minnesota and wraps up on August 29 in Greenfield, Massachusetts. But as the saying goes, there’s no rest for the weary. As soon as they return home, it’s time for the first ever Hiero Weekend, which goes down from August 30 to September 1.

The festivities culminate with actual Hiero Day in Oakland on September 2. Tickets and a rundown of the full schedule are both available here.