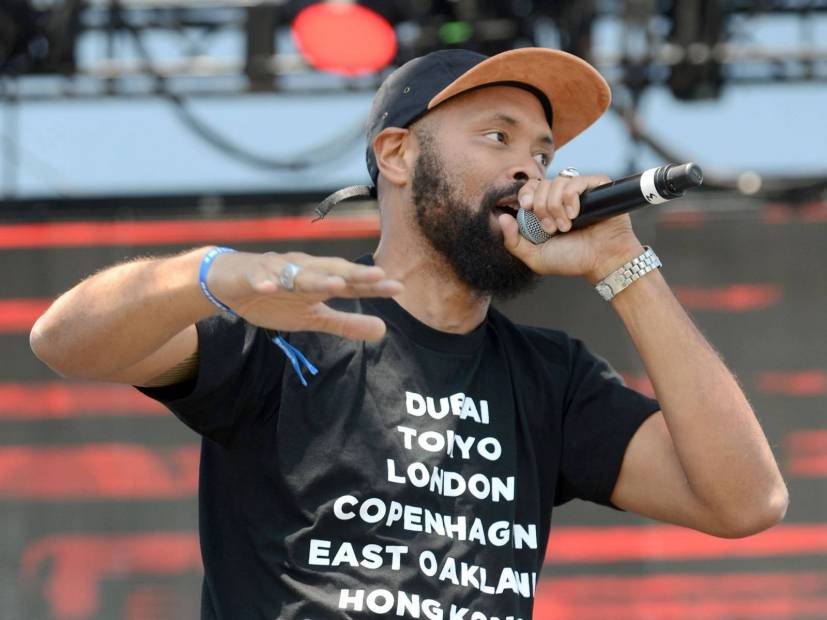 Turning the corner at Denver’s Cervantes Masterpiece Ballroom, a masked man dressed in a stylish three-piece suit sits on a stool in front of the audience, looking helplessly debonair.

With the mic firmly in his grip, he proceeds to deliver potent rhymes about lust, greed and other cardinal sins as DJ True Justice provides the beats.

Unless you’re a dedicated fan, you’d have no idea it was Tajai of the mighty Hieroglyphics crew. The only hint would’ve been the three white dots placed across his black mask, a nod to the Bay Area collective’s infinity logo.

“Rap Noir was a conceptual album and I feel like I’m more channeling a narrator more than the actual rapper, so I wanted to separate the timeline or the stream from Tajai,” he explains to HipHopDX. “And also with just with the logo, we’ve got a little movie coming out soon and so I was just thinking about the Alfred Hitchcock, Rod Serling kind of thing.

“I wanted to narrate it and create a new character because a lot of the subject matter that I’m tackling there is not stuff that you would want to hear necessarily from Tajai from Hieroglyphics.”

To Tajai, Rap Noir is a vessel to flex other creative muscles he might not routinely use in Hiero. The fancy aesthetic is an added bonus.

“The stories that I’m telling on there are not that guy’s stories,” he says. “They’re just stories — I’m more narrating than participating. It’s kind of more like a voice, and I think giving the physical form to a voice, I wanted it to be something special.”

Tajai admits the getup has fooled some people, but it depends on the person.

“The real Hiero heads are like, ‘Tajai!’ — they knew it [was me] the whole time while I was onstage,” he says. “And I’m like, ‘Yeah, OK, you know. We know.’ But other people have no idea. There’s a guy actually who’s driving with us right now. He’s got the same build and people have been coming up to him like, ‘Yeah, Good show.’ You know, so it’s funny.

“I just like it because I get to do something out of character. I live in Oakland and grew up in not the best area, so I have a lot of these types of stories.”

The tour kicked off mid-May in Seattle and made several stops in California before ultimately wrapping up in Denver on May 31. They still have two more legs to go — one that will be focused on the Midwest and the South and another that will travel through the Southeast and East Coast.

In Part II of the interview, Tajai talks the key to Hiero’s longevity, new music and what keeps him motivated.