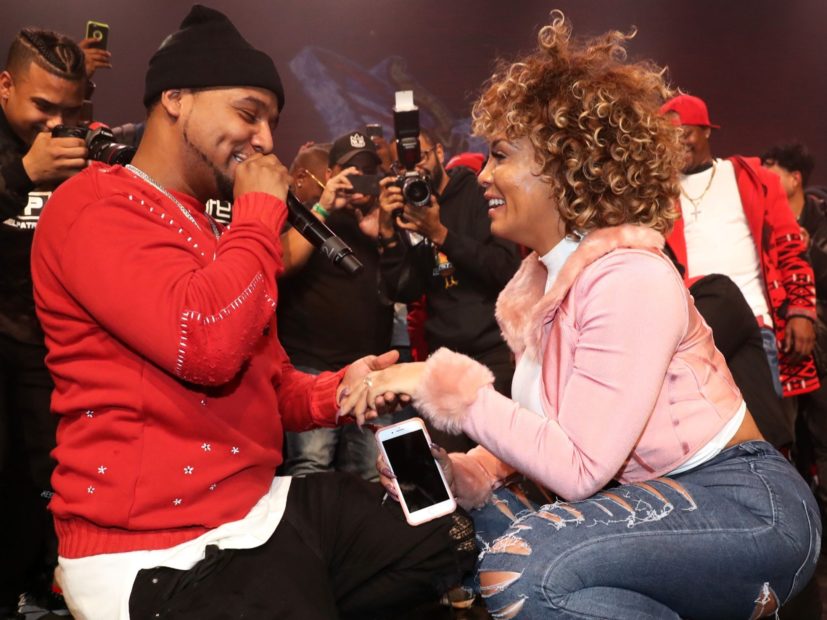 Love was definitely in the air at New York City’s Apollo Theater on Friday night (November 23). As The Diplomats celebrated the release of their new studio album, Diplomatic Ties, Juelz Santana decided to pop the question to longtime girlfriend Kimbella Vanderhee.

In video clips captured of the magical moment, Santana asks Vanderhee to join him centerstage. He begins his proposal by explaining to the roaring crowd that she’s been by his side for years.

“This is my lady right here,” he begins. “She’s been rockin’ with me for a long, long time. She’s stuck with me through the ups and downs, the ins and outs, the good times and bad times. She held a nigga down when I put her though all types of hell, all types of bullshit.

“I love you, baby. You are my queen and I wanna do this in front of everybody right here.”

As Jim Jones and other members of the veteran Hip Hop collective look on, Santana gets down on one knee and pulls out an engagement ring.

From there, they share a kiss and Vanderhee says yes. Santana and Vanderhee have been dating for 10 years and have two children together. The couple has also starred on Love & Hip Hop: New York for several seasons.

Following the momentous occasion, Vanderhee took to Instagram to show off her diamond ring.

“Good night, literally,” she captioned the photo. “What a night to remember.”