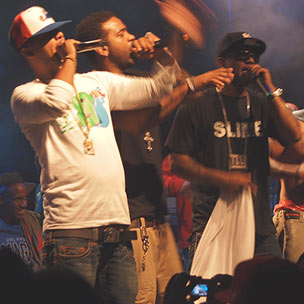 The Diplomats will be hitting the road for its “Pledge of Allegiance” tour in just a few weeks.

The Harlem collective has just unveiled its seven-city tour schedule, confirming earlier claims by Funkmaster Flex that the crew has “put the bullshit aside” and is reuniting for a slew of shows.

Cam’ron, Jim Jones, Juelz Santana and Freekey Zeekey are each slated to appear during the seven-city stint. The Diplomats is set to kick off their tour at BB Kings in New York, eventually making stops in New Jersey, Connecticut and Florida.

In March, the Dips are scheduled to appear at the South by Southwest festival in Austin, Texas.

Throughout the tour, they’ll be joined by Funkmaster Flex and Hot 97’s DJ Drewski.

More tour dates are expected to be announced soon.

Check out the confirmed tour dates below: