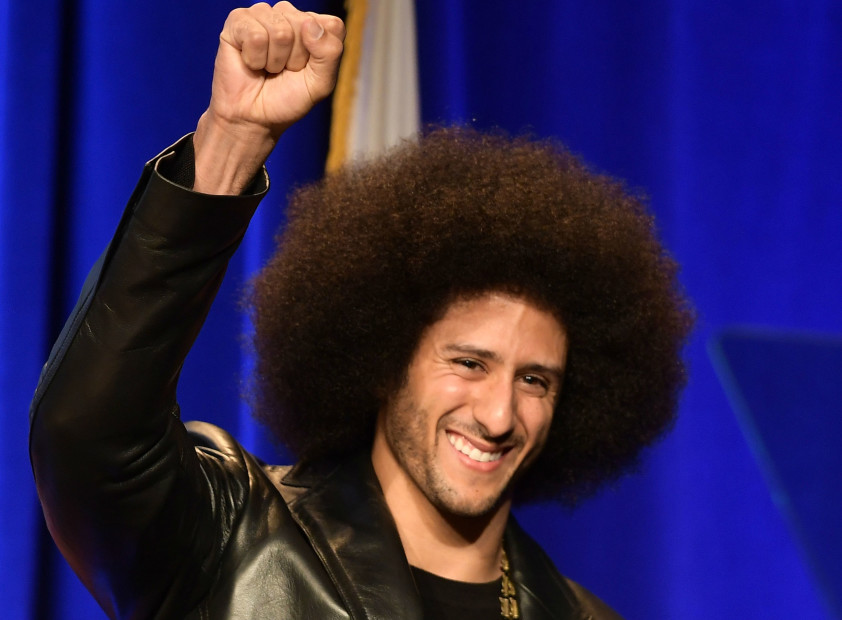 On Wednesday (September 5), the former San Francisco 49er quarterback shared the controversial “Just Do It” commercial via Twitter.

Once again, he captioned the clip with the ad campaign’s tag line.

“Believe in something,” he wrote. “Even if it means sacrificing everything.”

Believe in something. Even if it means sacrificing everything. #JustDoIt pic.twitter.com/x5TnU7Z51i

According to CNN, the ad will air during the NFL season opener on Thursday (September 6) when the Atlanta Falcons take on the Philadelphia Eagles.

[This article has been updated. The original version was published on September 4, 2018 and can be found below.]

Social media has been in an uproar since Nike revealed Colin Kaepernick as one of the faces of its new ad campaign celebrating the 30th anniversary of “Just Do It.”

The former NFL star, who has become a symbol of social justice since taking a knee during the National Anthem in 2016, shared a photo of the campaign featuring his likeness to his Twitter account on Monday (September 3).

“Believe in something, even if it means sacrificing everything,” he wrote. “#JustDoIt.”

Believe in something, even if it means sacrificing everything. #JustDoIt pic.twitter.com/SRWkMIDdaO

Donald Trump enthusiasts and other detractors were outraged the retail behemoth unveiled the campaign on Labor Day. In an effort to boycott Nike, people started posting photos of themselves burning their Nike gear or simply cutting the logo out of their clothing.

Naturally, plenty of Twitter users took the opportunity to mock those boycotting the brand.

However, it wasn’t without consequence. According to MSN, Nike stocks plummeted more than two percent since the ad was unveiled.

But, any ramifications from the Nike boycott hasn’t stopped Kaep’s supporters from being vocal about their stance.

Several members of the Hip Hop and R&B community got in on the action, including George Clinton, Chuck D, DJ Khaled, KXNG Crooked, CunninLynguists’ Kno, Blockhead and more.

NFL yup… they tossed this mans career as they want NegroFrozenLips https://t.co/QsF7Ys6hPZ

What’s funnier than seeing a bunch of right wing people snowflake out about Nike. Seeing a bunch of neo-liberals cheer that company on like its Doctors Without Borders. Lol Great move by them though. Make the story about “Rebellion.” Kap doesn’t need to be validated by that.

I know this isn’t rap talk but pic.twitter.com/yqMEN1POrr

Child please. They’ll be more than ok if you do and I’m sure they anticipated this foolery. #NikeBoycott

I've pretty much only ever bought Nike's my entire adult life (a few pair of adidas and new balance thrown in over the decades) cause I feel they make the coolest looking sneakers. The fact they now enrage some dumb conservative football fans is just a cherry on top.

Believe in something ✔️✊ pic.twitter.com/2YuGCbNd3n