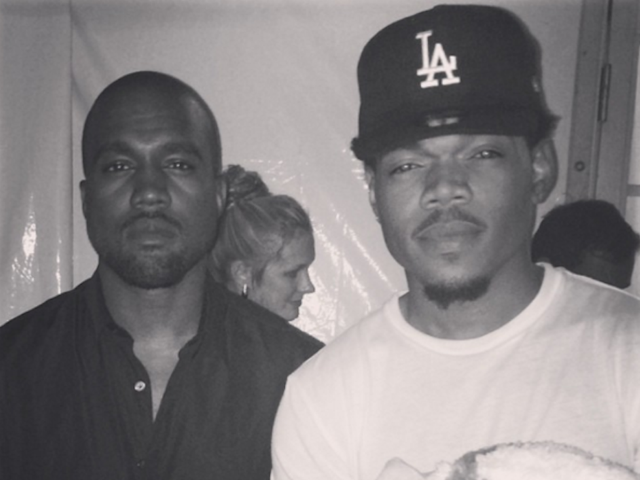 Kanye West Is In Chicago Working On Chance The Rapper's Album

Kanye West was a special guest on 107.5 WGCI in Chicago on Wednesday (August 29) where he cleared the air surrounding several contentious topics. From his “slavery for 400 years sounds like a choice” comment to the MAGA hat, he covered all the bases.

On his way out, ‘Ye was stopped by a FOX 32 reporter who asked why he was back in his hometown. He explained he was there to work on Chance The Rapper’s forthcoming album.

“I came out here with Chance to work on his album and I’ve just been hanging out with my friends,” West said. “I love this city and I’ma be here a lot more. It’s a super inspiring place that made me who I am and I believe there’s some work that I could contribute to.”

.@kanyewest told us this morning he plans to spend more time in Chicago: "I believe there's some work that I can contribute to" pic.twitter.com/23uS6BkbOa

Chance is one of many artists to get the seven-track album treatment courtesy of Kanye. This summer, the super producer crafted albums for Nas, Pusha T, Kids See Ghosts (with Kid Cudi), Teyana Taylor and his own solo album. [apple_news_ad type=”any”]

[This article has been updated. The original version was published on July 12, 2018 and can be found below.]

On Wednesday (July 11), Chance The Rapper sat down with Windy City LIVE and revealed that Kanye West would be heading to Chicago this month to work on their album.

“Kanye West is my first image of a free black man in the industry and I just always loved him for that, loved his music, loved his creativity, but loved his voice, loved, you know, his fearlessness,” Chance said.

“Working under him or working with him on his projects is crazy, but him telling me he wants to produce my album and come to Chicago and work with me,” he told the audience. “This month we’re working in Chicago.”

Several artists have teased possible collaborations with Kanye, but Chance’s has so far been the one with the most details around it.

Chance went on to express that the project would be “very very personal” before taking a few minutes to talk about his recent engagement.

“When I proposed, me and my girl never got a chance to have a quiet moment or have any real discussion on how we wanted to announce it to the world or if we would announce it to the world. How much we wanted the world to be in this, but because of how much accessibility publications have to my life through my friends’ Instagram and stuff, our stuff was out there immediately. Before I could even get up and make a toast it was already up on TheShadeRoom and everything.”

The rapper also took a moment to speak on the upcoming 50th anniversary special olympics taking place in Chicago. Chance, along with Usher, Smokey Robinson and more, will be performing during the celebration concert on July 21.

Chicago! I’m excited to announce I will be headlining the Special Olympics 50th Anniversary Celebration w Usher and many more! Get your tickets now @ chanceraps.com