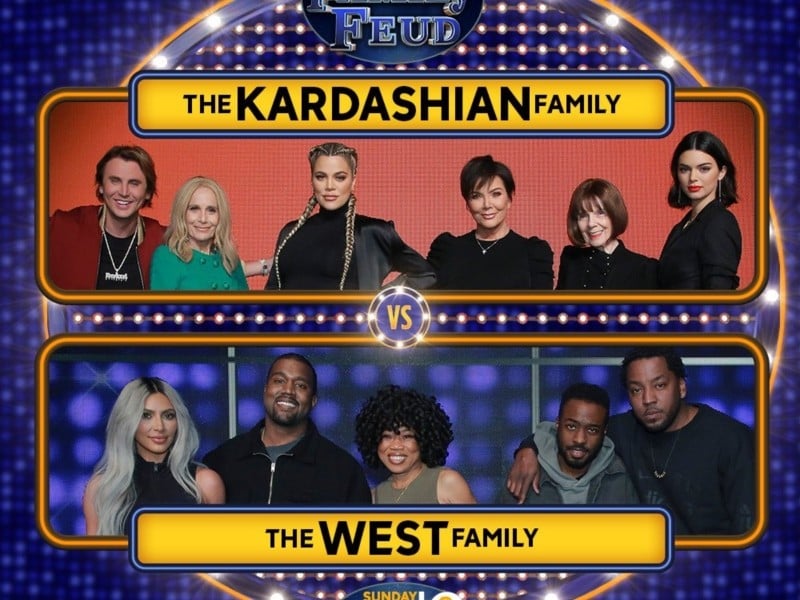 After receiving a rare birthday message from Rick and Morty, Kanye West had a special wish come true on Sunday (June 10) when his episode of Family Feud finally aired.

The showdown comes in the midst of the rollout of five Kanye-produced albums and was set up to be the Wests vs. the Kardashian-Jenners. Kanye’s team included his wife Kim and his cousins Kim Wallace, Jalil, and Ricky. The Kardashian-Jenners included Kris Jenner, her mother Mary Jo, Kourtney Kardashian, Kendall Jenner, cousin Cici Bussy, and friend Jonathan Cheban.

The rounds included prompts like, “Name the top five reasons why Steve Harvey is a good kisser,” “Name an occasion when you slip into something sexy instead of comfortable,” and, “If you’re at a wild party and everyone is naked, name someone you would hate to see show up.”

The Kardashian-Jenners won the game but allowed Kim and Kanye to play the final Fast Money round instead since it’s always been a dream of Kanye’s. Kanye came in the clutch with his answers, ultimately winning $25,000 for their charity, Children’s Hospital Los Angeles.

Check out clips from the episode below, including how happy the whole experience made Kanye.

Kim and Kanye are big fans of the show

I just wanna have as much fun in life as Kanye West is on family feud ? pic.twitter.com/HSPVphRIjP