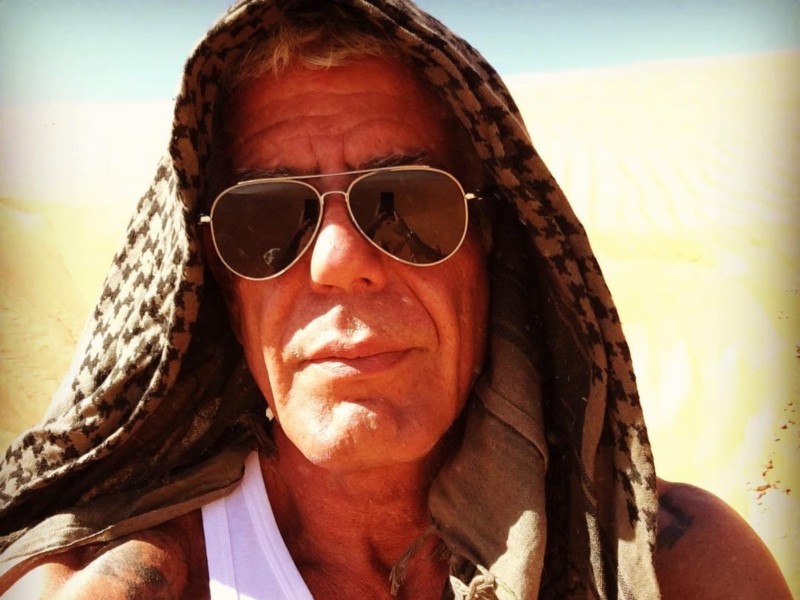 The world has lost another luminary this week.

CNN confirmed this morning (June 8) that Anthony Bourdain had taken his own life. He was in France working on a new episode of Parts Unknown. His close friend, French chef Eric Ripert, reportedly found Bourdain unresponsive in his hotel room.

CNN statement regarding the death of our friend and colleague, Anthony Bourdain: pic.twitter.com/MR1S5fP16o

Bourdain had several successful food and travel TV shows and books, and will go down as one of the most influential chefs whose reach went outside of just the culinary world. In 2013, he won a Peabody Award for Anthony Bourdain: Parts Unknown for “expanding our palates and horizons in equal measure.”

In October of 2014, CNN aired an episode of Parts Unknown that focused on the birthplace of Hip Hop, the Bronx. In it, he interviews Afrika Bambaataa, DJ Kool Herc, Melle Mel, Futura 2000, and Desus. He also comments on the rich cultural history of the borough, especially the significance of Hip Hop today: “Hip Hop, which is now the soundtrack to every commercial, every football game, every song, everything we hear on the radio, everything.”

The outpouring of support and gratitude for Bourdain’s contributions during his career has been overwhelming from Hip Hop personalities and beyond.

RIP ANTHONY BOURDAIN NEXT MEAL I COOK FOR A PRETTY YOUNG WOMAN IS IN YOUR HONOR.

reposted: @questlovesfood Just saw the news this morning about Anthony Bourdain’s passing. I have so many thoughts about him—memories, emotions, and unanswered questions—that right now it’s sort of a jumble. I feel so thankful for him to introducing me to a world I never knew, the world of food and especially food around the world. It was through Anthony that I learned about the sushi master Jiro Ono was and that recommendation (seeing the Jiro doc & making a pilgrimage to Tokyo by any means necessary) singlehandedly changed the course of my professional and creative life. Anthony also believed, and talked often, about how all forms of creativity were connected: how chefs and drummers and comedians and actors and directors and painters all drew on the same well of thoughts and emotions. That feeling stuck with me. Watching him take trips to faraway lands to get a taste of heaven (and, just as often, to show how life on earth can be hell for people under the thumb of cruel governments or oppressive poverty) was the equivalent of my many trips to obscure record shops continents away. Lastly I’ll miss our endless banter about the merits (or lack therof) of Yacht Rock. Anthony came on Fallon often, and every time he liked to warn me that his walk-on music better have “some umph to it.” He wanted power and attitude. I’d agree with him, and then I’d play another Billy Joel song, which infuriated him. A few years back, to thank him for writing the foreword to my book, I started the ultimate troll project, though I never got to give it to him. We had an “argument” over Herb Alpert’s “Route 101”: I made the case that the song’s good-feeling/good-time vibe couldn’t be denied, and he made the case that he denied it, and the more heated the argument got the more we laughed. I told him imma make him the mother of smooth-pop playlists and then he would see the light. I’m finishing that playlist, and when I do, I’ll name it after him, just so I can imagine that laugh of his.

Stunned and saddened by the loss of Anthony Bourdain. He brought the world into our homes and inspired so many people to explore cultures and cities through their food. Remember that help is a phone call away US:1-800-273-TALK UK: 116 123

Anthony. One of my idols. Unapologetic, passionate and one of the best storytellers on the planet. Thank you for making food so exciting. And always standing up for everything right. Horrible. Why why why. Be at peace now 🙁

BROTHER ANTHONY @BOURDAIN YOU ALWAYS TELL ME I AM THE LEGEND. YOU ARE THE REAL LEGEND. I LOVE YOU FOREVER BROTHER

Anthony Bourdain honestly changed the way I looked at food. I just loved the way he explored life through food. No Reservations/Parts Unknown was my way of exploring the world.

A friend of @StarTalkRadio. A friend of Food & Culture. A friend to us all. Anthony Bourdain, RIP. (1956-2018). pic.twitter.com/uVqEgldGsL

Anthony Bourdain committed suicide. I feel sick to my stomach. He inspired me to travel the world and get over my fear of flying. I was lucky enough to meet him on one of my flights. I can't breathe