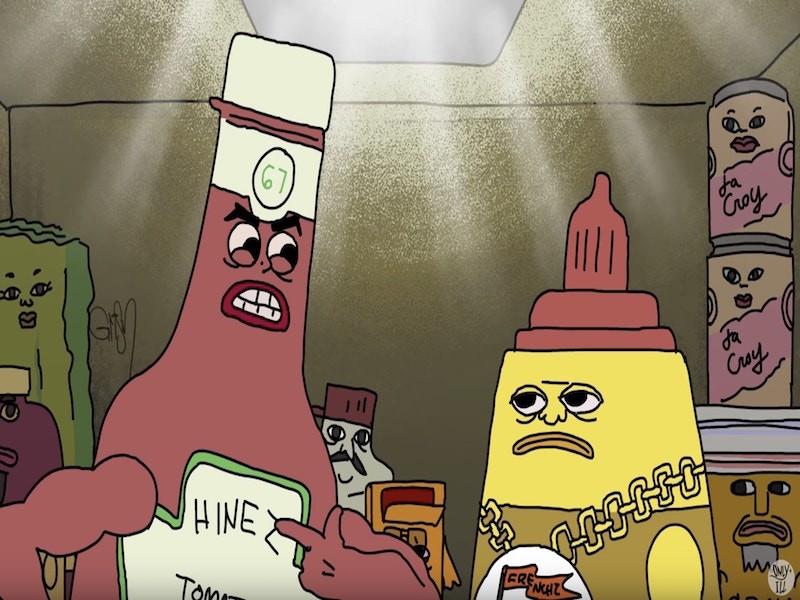 Illmac & Dizaster Face Off As Condiments In Animated Rap Battle

Underground rapper and battle rap legend Illmac dropped an animated video on his YouTube channel on Monday (May 28) depicting a URL/KOTD style battle event going down inside a refrigerator, between condiment bottles. The crudely-done cartoon, reminiscent of Adult Swim’s lo-fi aesthetic, showcases the classic rivalry between ketchup and mustard coming to a head.

Ketchup is voiced by world-famous battle rapper Dizaster, who bars out with lines like, “Since you run with butter/ My toast will never jam like your buddy Smuckers.” Illmac himself plays Mustard and admirably holds his own against the scowling, red opponent, “Somethin’ squirtin’ if I see Ketchup pack it/ And tear his top off, like a ketchup packet.”

Illmac spoke to HipHopDX about the birth of this idea:

“I was smoking with the homie Bobby Bucher, bored at the studio. I was making a sandwich … And he came in like, ‘Yao let’s battle as Ketchup and Mustard.’ We battled on some high freestyle shit. Then a few months ago I was brainstorming ideas for new YouTube series and that popped into my head. I knew to pull it off the way I wanted it to it had to be a cartoon … to maintain more of a surreal, unique vibe.”

Illmac is treating this like a pilot to a potential series. “We’re going to shop it around to see what we can really do with it. We’re super hyped on the final product,” he says.

He explained there are several other episodes mapped out, and, while he can’t confirm one way or the other what will make the final cut, some ideas that have been thrown around are ‘Dog vs Cat,’ ‘Mullet vs Man Bun,’ and ‘Peanut Butter vs Jelly.’

The short was produced by Illmac and Andres Salaff, who also did the animation. Illmac and Dizaster recorded the voicework along with rapper/veteran battle organizer Lush One, who played the box of baking soda hosting the battle. Chase Moore is responsible for the intro and outro music. The background art was illustrated by Thomas Lynch III.

Check out the video, which is packed with sight-gags, puns, and food-related bars.