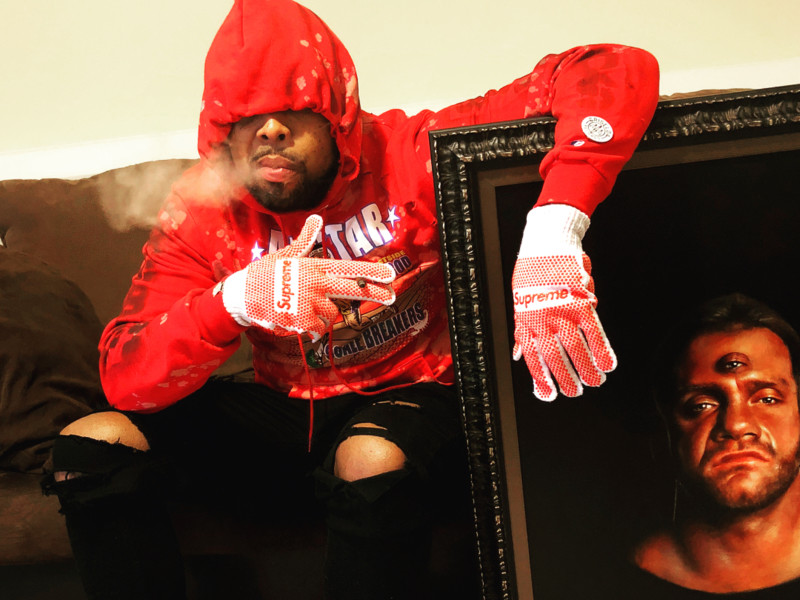 As Drake continues to roll out his upcoming album, Buffalo artist Westside Gunn wants to clear up any confusion about who gets remembered for what.

In an Instagram post he uploaded recently, Gunn counts the “coincidences” between Drake’s upcoming album and himself. Drake’s album is titled Scorpion (Drake’s astrological sign is Scorpio) and Gunn’s company logo is a scorpion. Drake was also seen wearing a Razor Ramon (real name: Scott Hall) T-shirt. Gunn has used a reference to Hall as a nickname and for an EP title.

Gunn also addressed other issues — like claiming that him being from Buffalo, and not NYC, has held him back as far as media coverage. WSG also believes Migos has recently helped popularize wrestling for a lot of Hip Hop fans (see Offset’s “Ric Flair Drip” for one example), while he’s been referencing it for years. (Granted, even before Gunn, there have been other rappers making wrestling references in their raps such as Cam’ron, DOOM, Ruff Ryders, Outkast, Wu-Tang Clan and pretty much every battle rapper.)

Aside from wrestling, the Shady Records rapper also wants credit for starting the half and half shirt style. He ends his lengthy post by promoting his upcoming Chris Benoit album and clarifying he’s not starting any wars over his legacy: “YALL BETTER STAY WOKE I AM THE CULTURE & again I HAVE NO BEEF whatsoever wit ANYBODY I’m on my own Dick”

I just wanna Say Something Idk Drake he prob a Kool dude who knows and I'm just speaking MY MIND and will take this down soon (BC I take EVERYTHING down not bc of anybody trust me)BUT.. my company logo is the scorpion ? and coincidentally he names his Album "Scorpion" I was at Coachella wearing the hat and somebody says is that Drakes Hat I almost smacked him, now he's rocking Scott Hall shit when I've never seen this nigga Anywhere at any Wrestling event AND I go by Hall , my point.. this industry funny as hell, they never pay homage to the niggas who do this shit foreal they only acknowledge the niggas they dickride my shit out the mUD and I'm waaay ahead of my time, I was robbed off the GhostBuster shit, the half n half shit, I barely get spoke about bc I'm from BUFFALO and not NYC, I barely get blogged about or even mentioned for the same shit niggas copy yrs later, or blatantly I guess wrestling cool now bc of Migos whe them niggas is YEEEEEEEAAAAARS late I have nothing against anybody and niggas know I give it up in real life fuck this industry shit but just know I FATHER a lot of shit wit no credit just to watch niggas get all of it I just gotta laugh, like I always say idc how old u are, how much money u have, how much u sold when I look at niggas I feel untouchable, idk when it's gonna happ but I'll be the biggest nigga in Hip Hop just watch it's gonna start wit CHRIS BENOIT the reason I named it that is bc I'll Kill Anything ?????⚖️⚖️⚖️⚖️⚖️ #FLYGOD #PraiseBoth #theALMIGHTY #GXFR YALL BETTER STAY WOKE I AM THE CULTURE & again I HAVE NO BEEF whatsoever wit ANYBODY I'm on my own Dick

They wondered could I make an album better/equivalent to "FLYGOD" and I answered simply "CHRIS BENOIT" this album is a MASTERPIECE I invested thousands just on the original art piece by @isaacpelayo which to me now is the new Mona Lisa EVERY beat, rhyme, feature is stellar as a true fan of HIP HOP and my love for ART I can honestly say this will prove that I'm a LEGEND, I've never claimed to be the best lyricist but I make some of the best music and is behind/influence the best in the game this waT the CULTURE NEEDED ?????? #FLYGOD #CHRISBENOIT #SUPREMEBLIENTELE #theALMIGHTY #GXFR #LEGEND #ART #CLASSIC #MASTERPIECE #HIPHOP #PraiseBoth #originalART #OfficialCover #culture STAY TUNED on news and contest