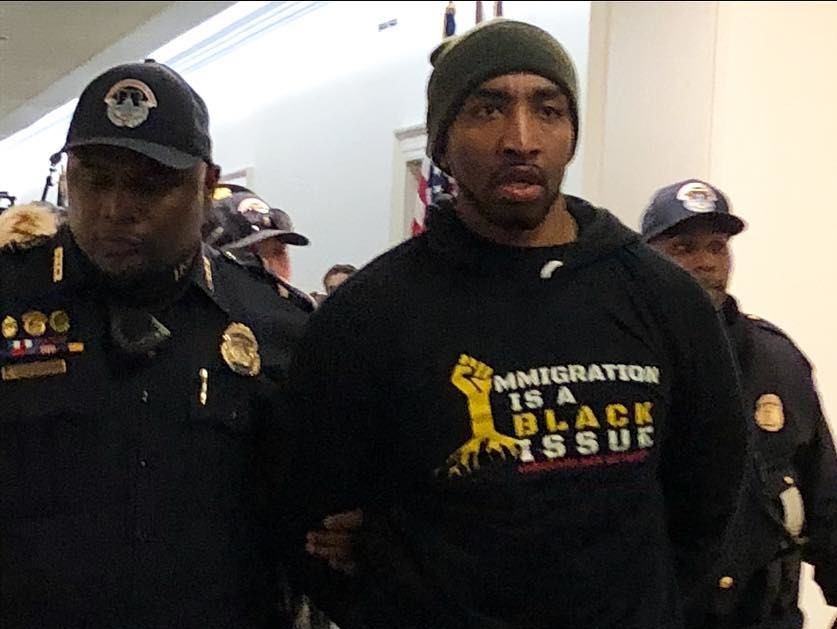 Bronx rapper Mysonne was arrested during an immigration protest in Washington, D.C. on Tuesday (February 27).

Mysonne, along with a number of other activists including Congresswoman Yvette D. Clarke, were protesting for a clean DREAM Act, a permanent solution for Temporary Protected Status/Deferred Enforced Departure holders, as well as opposing President Trump’s attempts to repeal the Diversity Immigrant Visa Program.

45 created the #DACA crisis. He chose to put the families through turmoil. His vulgar and disgraceful rhetoric towards black immigrants, inconsistencies, and inability to govern have caused uncertainty and fear among #DREAMers and their families. He owns this chaos. pic.twitter.com/spUP7dMRoF

Mysonne was filmed being escorted away in handcuffs when someone asked him why he was being arrested.

“Because I stand for something,” the Bronx rapper said while officers ushered him away. “Because black immigration is our problem.”

Regrann from @being_ianta – my brother @mysonnenygeneral has been arrested for standing for #BlackImmigration @undocublack ✊? – #regrann

Mysonne later hit Instagram to reveal he had been released from custody, but insisted there is still more work to do.

Thanks for All your prayers and love we are free from jail but not From injustice.. "Bury Me in the Ocean with my ancestors who jumped from the ships because they knew death was better than bondage # #KillmongerSpirit. #IworkforthePeople #cleandreamact #GangstaButWokeAsFuck