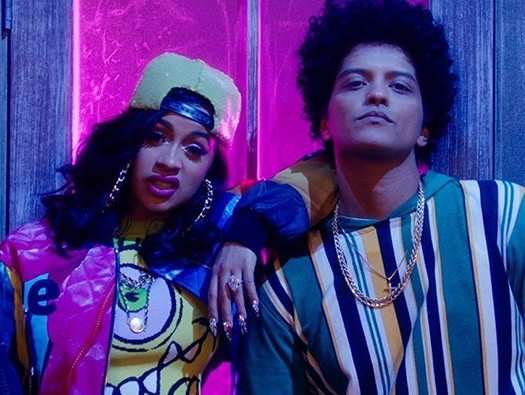 Meanwhile, Post Malone continues to maintain his #1 position with “Rockstar” featuring 21 Savage. His Stoney single “Congratulations” just hit over a million in digital sales as well.

Bruno Mars’ “Finesse (Remix)” featuring Cardi B pops up at #5 this week. It sold 30,105 in digital downloads, according to Neilson SoundScan reports. The track marks the Bronx rapper’s fifth song on the R&B/Hip Hop Single Sales chart and Mars’ fourth.

Despite a 24 percent decrease in sales from last week, Cardi’s breakout hit “Bodak Yellow” still manages to make its way to the Top 3 and lands in the #3 slot. At #10 is the popular Migos’ track “MotorSport” featuring Cardi (again) and Nicki Minaj, which pushed 23,048 in sales.

Also trending for the Compton, California Hip Hop powerhouse are “DNA.” at #21, “LOYALTY.” featuring Rihanna at #32 and his feature on Travis Scott’s “Goosebumps” at #40. The newly released Black Panther: The Album cut “All The Stars” featuring SZA hit the chart at #100.

Post Malone’s “Congratulations” hit 1,002,779 in digital downloads for the week ending on January 4. The Stoney track featuring Migos member Quavo tapped in at #15 and pushed 16,151 in sales.

Post Malone currently tops the R&B/Hip Hop Single Sales chart at #1 with his 21 Savage-assisted single “Rockstar,” which is also reaching a million in sales with 861,408 units sold to date.